Last semi-final held in cadets’ mess at the Curragh Camp 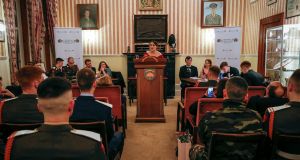 Mairead O’Leary from UCD LawSoc speaks during the semi-final of the Irish Times Debate 2019-2020 in the cadets’ mess at the Curragh Camp. Photograph: Crispin Rodwell 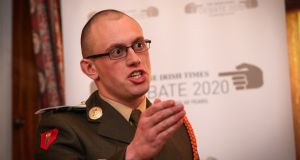 Cadet Chris Mulligan speaks for the opposition during the semi-final of the Irish Times Debate 2019-2020 in the cadets’ mess at the Curragh Camp. Photograph: Crispin Rodwell 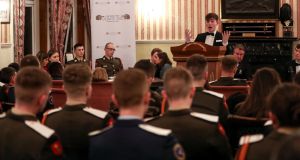 Killian Farrelly from UCD LawSoc speaking for the proposition during the semi-final of the Irish Times Debate 2019-2020 in the cadets’ mess at the Curragh Camp. Photograph: Crispin Rodwell

Speakers from Trinity College Dublin and the Solicitors’ Apprentice Debating Society of Ireland (Sadsi) have secured the last three places in the 60th grand final of the Irish Times Debate.

The motion debated at the fourth and last semi-final, which took place in the Cadets’ mess in the Curragh Camp, was “This house believes that the European Union has failed the working class”.

The winning team was Lucille McKnight and Ruairc O’Leary from TCD Phil, while Eamonn Butler (Sadsi) went through to the final as an individual.

The debate was chaired by Tom Clonan who won the competition in 1990.

The final takes place in Trinity on Friday, February 28th and will be chaired by Chief Justice Frank Clarke. Finalists will compete for the Demosthenes and Christina Murphy Memorial trophies and a tour of the US.

30% of admitted patients discharged within 24 hours ‘crazy’ 01:00
L’Arche sex abuse: ‘We didn’t know he had a darker side’ 00:32
Preparations under way for St Patrick’s Day programme in Washington 00:10
Spread of coronavirus triggers European travel curbs 00:02
Why Sinn Féin will not call the State by its name 00:02

1 What evidence is there that the IRA still controls Sinn Féin?
2 Why Sinn Féin will not call the State by its name
3 Spread of coronavirus triggers European travel curbs
4 Brazilian father to be deported days after daughter’s birthday
5 Coronavirus: Almost 60 new cases recorded in Italy as two die
Real news has value SUBSCRIBE