Taoiseach among thousands on 180km Ring of Kerry cycle

Charity fundraising event brings riders across Iveragh and back to Killarney 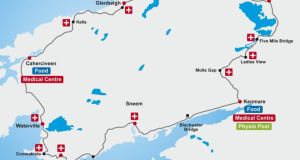 Route of the Ring of Kerry charity cycle today in which thousands are taking part, among them Taoiseach Enda Kenny.

Ten thousand cyclists are taking part in the annual Ring of Kerry charity cycle today – among them Taoiseach Enda Kenny.

The 112 mile (180km), gruelling but spectacular cycle across Iveragh and back to Killarney is Munster’s biggest annual one day fundraising event.

Now in its 31st year, it has so far raised almost €7 million for Kerry charities.

Mr Kenny set off at 8.15 am and is in a group including his son Ferdia, Minister for Arts Jimmy Deenihan, Chief Garda Superintendent of Kerry Pat Sullivan, Minister of State Ciaran Cannon and the RTE southern correspondent Paschal Sheeehy.

Mr Kenny and his group stopped at Waterville before tackling the height of Coomakista Pass and the spectacular view over the Skelligs – part of which is a monastic world heritage site.

Mr Kenny is riding for the Kerry Motor Neuron Action making a commitment to do so during a visit to Killarney in late May when he was approached on Main Street by the charity’s chairman Christy Lehane, and in honour of the late Fine Gael TD Nicky McFadden.

Numbers signing up for the cycle are so large this year, registration had to close early.

“I have never seen anything in all my years with this event like the sight over the Skelligs just now with cyclists so mesmerised by the blue of the sea they got off to stop and gaze. It’s an absolutely beautiful day on the Ring”.

Meanwhile early birds who set off at around 6am are already home with Killarney man Kieran Maddigan among the first home.

Road closures have been staggered to accommodate the cyclists.