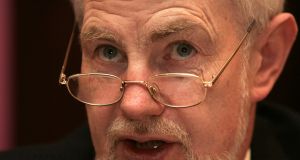 The appointment by Tánaiste Joan Burton of David Begg to the role of chair of the Pension Authority has been criticised.

Tánaiste John Burton has admitted using an exceptional clause in new guidelines to appoint David Begg as chairman of the Pensions Authority.

Mr Begg’s appointment has been criticised because it did not follow guidelines on appointments to State boards which provide for a competitive process. Mr Begg was appointed without a competition.

A spokesman for the Tánaiste has said clause 9.1.4 of the new guidelines, published last January, allows for exceptions in the case where a minister “has independently identified a person who is evidently and objectively highly qualified and capable of effectively discharging the role of chair of a state board and who has not otherwise applied through the stateboards.ie process”.

Mr Begg said he will not take up the role with the authority if an Oireachtas committee decides he is an inappropriate appointment.

He said he does not need the “grief or the hassle” that has followed the announcement of his appointment.

Mr Begg will replace Jane Williams who has been chairwoman of the authority since June 2010. His appointment has drawn widespread criticism, including from members of the Labour Party, as it was not made through the recently-introduced application channels for public jobs.

On Friday Minister for Public Expenditure Brendan Howlin rejected a charge that “cronyism” was involved in the appointment to the role, which carries with it a payment of €20,000 per year.

David Begg appointed to Irish Pensions Authority chair. What does he know about pensions? How many state gigs has bearded brother now got?

“Where a minister determines that there is a unique set of characteristics available to somebody that might not have applied in the normal course of events, they can reach out to that person,” said Mr Howlin.

“I absolutely reject the charge of cronyism because David Begg is not a member of the Labour Party, to my knowledge has never been, but he is somebody who is regarded highly by every politician, well maybe [not by] one or two that you could mention, but by the vast majority of politicians for his work in the trade union movement over the last 30 years.”

Sinn Féin deputy leader Mary Lou McDonald has described the appointment on Thursday as “a timely reminder to voters that political cronyism is alive and kicking in the Labour Party”.

Independent TD Michael Fitzmaurice said that, far from a democratic revolution, Mr Begg’s appointment shows “cronyism is part and parcel of this administration and it is no different to what has gone on in the past with other Governments”.

The manner of Mr Begg’s appointment has been criticised by Labour TD Ciara Conway who said she did not understand why the Government had rules for public appointments when it was clearly breaking them.

In February last year the Department of Public Expenditure and Reform provided guidelines on appointments to State boards which included independent vetting of all candidates.

These guidelines provided for the drawing up of a short list by the Public Appointments Service and a new website stateboards.ie was set up for those expressing an interest in State appointments.

Mr Begg’s appointment was also criticised by Independent TD Shane Ross who tweeted: “David Begg appointed to Irish Pensions Authority chair. What does he know about pensions? How many state gigs has bearded brother now got?”

Speaking on RTÉ’s Morning Ireland, Mr Begg said it was not a job he would have volunteered to do but said he had a long history of being involved in issues relating to labour relations, including pensions.

Mr Begg will appear before an Oireachtas committee at the end of the month to discuss his appointment.

If the committee decides he is not a suitable candidate, Mr Begg said he would stand aside. “There will be no offence taken. They can look for somebody else.”

However, the former union leader said he would not be driven out of the role by criticism and he was too long in public life to “bend and crack at the first attack that is made on me”. He said Mr Ross had been attacking him for 30 years.

The Tánaiste said on Thursday that Mr Begg’s public sector experience would “prove invaluable in identifying strategic opportunities as well as developing solutions to the complex challenges currently facing the pensions sector”.

Mr Begg said contrary to perceptions he did not sit on any other State board.

Mr Begg is a former director of the Central Bank, a former non-executive director of Aer Lingus and of the Advisory Board of Development Co-operation Ireland. He is also a former governor of The Irish Times Trust.