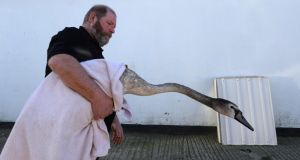 A swan, one of three rescued from the Stardust Memorial Park, is taken for a bath by the DSPCA’s PJ Doyle. Photograph: Cyril Byrne/The Irish Times 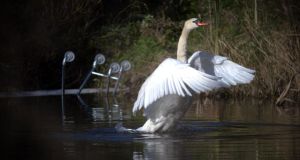 A swan in the pond of the Stardust Memorial Park where a diesel leak was discovered. Photograph: Cyril Byrne /The Irish Times 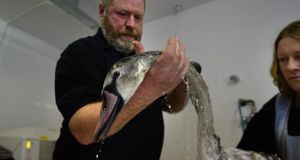 A swan, one of three rescued from the Stardust Memorial Park where a diesel leak was discovered, is cleaned by the DSPCA’s PJ Doyle and Gillian Bird. Photograph: Cyril Byrne/The Irish Times

The Dublin Society for the Prevention of Cruelty to Animals (DSPCA) has said it is seriously concerned for the wellbeing of swans and other wildlife following a suspected diesel spillage at a pond.

A number of swans have been removed and are said to be badly contaminated by the substance with vets now working to see whether they have ingested any of it.

The spill took place at a pond in the Stardust Memorial Park in Coolock but the cause is unclear at this time.

Dublin City Council has a crew at the site and it is believed they have located the source of the suspected fuel.

“We are concerned for the wildlife that is there [but]we are well prepared for this situation; we have facilities to deal with oil spills but these things shouldn’t happen,” said DSPCA spokeswoman Gillian Bird.

Although a small river flows into the park’s pond, this has not yet been confirmed as the source.

So far, animal welfare workers have removed four swans but a cygnet is still missing. There are also concerns for the population of ducks and mallards.

A spokeswoman for Dublin City Council said it is currently working to establish the source and extent of the pollution.