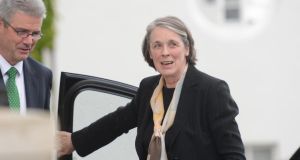 The Chief Justice Ms Justice Susan Denham. “It shall be the responsibility of the parties that submissions will not contain scandalous, abusive or vexatious material.” Photograph: Cyril Byrne

Lawyers’ written submissions to the Supreme Court are to be made available to the public for the first time under a new policy announced by the Chief Justice Ms Justice Susan Denham yesterday.

The submissions, in which legal teams summarise their arguments for the judges in advance of an appeal hearing, will be made available to any member of the public who requests them and pays a fee.

The reform has been under discussion for a number of years and could pave the way for wider availability of other court records in the future.

The media and campaigners have long complained that access to court documents is more tightly restricted in Ireland than in other countries.

In a direction to lawyers, posted on the Courts Service website, Ms Justice Denham said the new practice would apply to all submissions sent to the Supreme Court Office as of yesterday. The documents will only be available once the relevant appeal hearing begins.

The chief justice said parties to an appeal should, if a submission contained information whose publication was banned by law or court order, send the Supreme Court a redacted digital version of the document so that it could be released.

“It shall be the responsibility of the parties that submissions will not contain scandalous, abusive or vexatious material,” she added.

The practice of requiring legal teams to submit advance summaries of up to 25 pages was introduced in an effort to shorten hearings and make the Supreme Court more efficient.

During the referendum campaign on the plan to establish a Court of Appeal, some opponents argued that the court could make more progress in cutting its four- year waiting list if it imposed stricter limits on oral arguments and relied more heavily on written submissions.

Separately, the Judicial Appointments Advisory Board has advertised vacancies in the High Court and the District Court.

The advertisement says applications are welcome from practising barristers and solicitors who can provide a tax clearance certificate before the closing date of October 24th.

Serving judges do not have to apply to the advisory board for promotion to a higher court.

The board was established in 2002 in an attempt to make the judicial appointments process more transparent, but the system has been roundly criticised for leaving the final decision in the hands of Government.

The board draws up a list, in no particular order, of candidates who meet a set of minimum criteria, but the Government is not obliged to nominate an individual from that list.

The advertisement posted in recent days states that applicants may be required to attend for interview, but the board’s annual reports show it has never called individuals for interview.