At a press conference in Nashville this afternoon, Garth Brooks said he will “crawl, fly and swim” to Ireland in order to meet Taoiseach Enda Kenny if it means he can play five concerts at Croke Park. 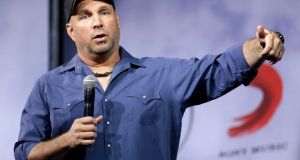 Country music star Garth Brooks has ruled out playing two daytime shows to accommodate five concerts at Croke Park in a compromise deal to restore all of his cancelled Dublin gigs.

He wouldn’t be caring for 160,000 fans if he performed afternoon concerts because it was designed as a night-time show, he told The Irish Times in an one-on-one interview last night.

Brooks was responding to a deal reached between Dublin City Council and Aiken Promotions, the promoter of the Irish shows, that would leave open the option of performing the five shows on three days with two of the shows running as afternoon matinee performances.

“It is a night-time show,” he told this newspaper. “But again you are talking about 160,000 people you are going to put out in the middle of the daytime too, you know, and just let them run that way.

Asked if the compromise of performing matinee shows was acceptable to him, he said: “If I care about those 160,000 people, no.”

Asked about a matinee show, he earlier told reporters at a press conference in Nashville announcing his comeback world tour and a new album that he did not want to perform “half-assed shows”.

The compromise was proposed after Brooks said he would only perform five shows or none at all, leading to the cancellation of all five.

The Dublin shows, which were to be the first in a comeback tour, overshadowed the announcement of Brooks’s much-anticipated return after a long period away from extensive touring and recording.

He said he was “shocked” and “dumbfounded” and had been under a “dark cloud” for the last 10 days over the cancelled Dublin concerts.

The record-setting solo artist said he was willing to meet Taoiseach Enda Kenny this weekend to find a way of playing the five night-time sold-out concerts to 400,000 people.

“If the prime minister himself wants to talk to me, I will crawl, swim,” he said.

Last night the Taoiseach quipped in response: “Well, that would be a world record.”

“Create your laws, create your guidelines, but don’t sell the show to people and get their hopes up and that you are just going to cancel on them and that is okay,” he said.

He ruled out performing again in Ireland until the rules were fixed.

“I don’t think you can talk about a future with Ireland until Ireland has a system that works,” he said.