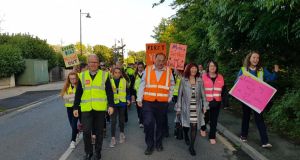 ‘Where’s my seat - I’ve got sore feet,’ was the message on placards to Bus Éireann on Monday morning as a dozen Meath post-primary students walked 10kms to school in protest at being refused access to a school bus.

Parents and their children - mostly first-year students - staged the walking protest after they were refused access to the school bus from their home in Kildalkey to their school in Trim.

They left the village at the same time as the school bus departed but walked a more direct route into Trim.

The issue surrounds so-called “concessionary” seats for children who are not automatically eligible for school transport. These children are considered for a place on the bus only after eligible children have been facilitated.

Eligible children are those who live a minimum distance – at least 3.2km at primary, and 4.8km at secondary level – from their closest school.

In cases where the number of concessionary applications for school transport exceeds the number of spare seats available, tickets are allocated using a random selection process.

Una Swords from Moyview, who has been told there are no seats for her two daughters on the school bus for this academic year, wants the so-called concessionary seats to end for all pupils to have a place on the bus for the duration of their second-level education.

“I received an email telling me that not only will Caoimhe (13) not be able to get the school bus to start post-primary this year but that my 17-year old daughter Aoife, who has been getting the bus for the last four years is no longer eligible either.”

“Each year, we have to apply and pay upfront €300 per child for a place on the bus and then wait until last minute for approval. We’re told the seats for everyone are concessionary which means the student isn’t guaranteed a seat for the full duration of their education.

“This is just madness. My daughter has, in effect, been kicked off the bus for who or why I don’t know, after four years and my youngest now can’t get a seat to start a new school.”

Ms Swords said that the Department of Education had informed some of the parents that the catchment school for the area is in Athboy.

“Most parents work and have to leave early so it would mean dropping their child to walk the streets of Trim at 7am. That’s just not on,” she said.

Sinn Féin TD Peadar Tóibín, who walked with the parents on the protest, said it was “another attack on rural Ireland and the Government needs to start reinstating and improving services in our villages and small towns.”

A spokesperson for the Department for Education and Skills said “where the number of applications for school transport on a concessionary basis exceeds the number of spare seats available, tickets are allocated using a random selection process.

Bus Éireann said that following the random selection process for concessionary seats, a number of children from the Kildalkey area who were not eligible for school transport to Trim, have not been allocated a ticket.

They added: “The terms of the school transport schemes are applied equitably on a national basis”.