Students among the few to arrive at Cork train station

Sisters Roisin and Aisling Moore were hoping to get a 6.40am train to Portlaoise 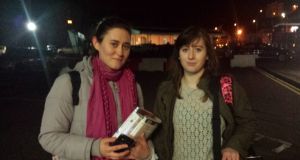 Sisters Roisin and Aisling Moore from Ballybrophy in Co Laois whose travel plans were disrupted when they turned up at Kent Station in Cork on Friday to learn of the stoppage by train drivers.

The extent of the disruption caused by a three-hour rail strike for commuters and main line rail passengers in Cork was difficult to assess early on Friday as most people seemed to have made alternative arrangements.

Only a trickle of people turned up at Kent Station on the Lower Glanmire Road to discover that mainline rail services to Dublin and commuter trains to Cobh and Midleton were not running.

According to an Iarnod Eireann employee, the station would normally be “jammers” with people between 6am and 9am but this morning it was deserted.

Among those who did turn up were UCC students and sisters, Roisin and Aisling Moore from Ballybrophy, Co Laois.

“We were planning to get the 6.40am train and we were hoping to be home in Ballybrophy by 9am but that’s all gone by the wayside now,” said Roisin who is studying Applied Psychology.

Aisling, who is studying law, admitted they missed media coverage of the strike and hadn’t realised they were going to have to change their travel plans for the Bank Holiday weekend.

“We knew nothing about the stoppage – we won’t be able to get a bus back so we’ll have to get a later train now – we were being extra careful because we have work tonight,” said Aisling.

Among the handful of people who did turn up at Kent Station were a number of foreign workers planning to catch commuter services to Little Island or Midleton in east Cork.

Polish national, Adrian Specka living Blackpool said he was not aware of the stoppage and was now under pressure to get try and get a taxi to his place of work in Midleton.

“I have no idea how I am going to get there - maybe get a taxi or see if I can get a bus that will get me there in time – it’s disappointing but I knew nothing about it,” he said.

Also trying to make alternative arrangements was Spaniard, Francisco Pena living on St Patrick’s Hill in Cork city who had turned up at the station to get a commuter train to Little Island.

“I work in Little island and I must get there now – I was watching the news and I heard something but I didn’t realise that there was a strike – I will take a taxi or a bus – I must go now.”

Disappointed passengers were being directed to the Bus Éireann station at Parnell Place to get alternative transport but few of those there before 7am were there because of the rail stoppage.

Of the ten people waiting there for buses at 6.50am, most were aware of the train stoppage but none were there because of it and used buses every day on their commute to work.