Stormont politicians begin to get back to normal business 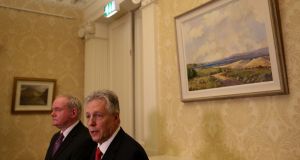 Northern Ireland Assembly members have began the business of bringing some normality to Stormont politics following the agreement on Tuesday involving the British and Irish governments and the North’s five main parties.

A special meeting of the Northern Assembly is being held on Wednesday where members are scheduled to debate a proposal that will allow the welfare deadlock that was threatening the Northern Executive and Assembly to be broken.

The DUP and Sinn Féin have signed up to the new deal which will provide about £2.3 billion in extra spending powers for Stormont over the coming five years. Among a wide range of proposals it also addresses the issue of paramilitarism and cross-Border crime but fails to agree measures to assist victims and survivors of the Troubles.

The SDLP and the Ulster Unionist Party have said they will not be pressurised into immediately stating whether or not they can support the deal while Alliance said it would implement the “parts that make sense for the good of society”.

The DUP Minister of Finance Arlene Foster told the Assembly on Wednesday that as a result of Monday’s agreement – A Fresh Start: the Stormont Agreement and Implementation Plan – that an additional £77 million is being released to assist various Executive departments, principally health.

Had the deal not been achieved the Executive was facing a potential shortfall of £600 million that, as was previously stated by Ms Foster, would have made Stormont imminently “unsustainable”.

The agreement however has released funding that Ms Foster said has put the Executive’s budget back in order. “It provides us with financial stability, and it provides us with a fresh start,” said the Minister.

Departments such as agriculture, justice and industry are also to benefit with more minor allocations.

The additional allocations were possible due to money that has gone unspent in various of the North’s departments. “Today’s reallocation of funding is only possible because of the agreement reached yesterday,” said Ms Foster.

“As a result of the implementation of the Stormont House Agreement we now have the vital resources to deal with in-year pressures faced by departments. This is the earliest opportunity to address some of the most significant pressures particularly in health, road maintenance and education,” she added.

“Additional resource funding of £47.6 million for the health service will increase capacity in our hospitals and provide more assessments and treatments across a range of specialtiesm,” said Ms Foster.

“It is estimated that funding of £40 million for elective care and diagnostics will allow up to a further 40,000 assessments and 15,000 treatments in additional operations and treatments by the end of March 2016. This will go some way to reducing excessive waiting lists for both outpatients and inpatients and improve outcomes for patients.”