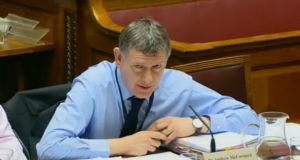 A senior Stormont civil servant has named a DUP special adviser who he suspected was involved in exerting pressure to continue the overgenerous cash-for-ash scheme at a time when cost controls should have been imposed.

Dr Andrew McCormick also said on Wednesday that it appeared “insider information” from some Stormont officials was passed on to the heating industry in Northern Ireland to take advantage of the renewable heat incentive (RHI) scheme.

Dr McCormick, who is permanent secretary at the Department for the Economy, said he believed one of DUP leader Arlene Foster’s former special advisers, Dr Andrew Crawford, exerted pressure to ensure the RHI scheme would remain open at a critical period in the late summer of 2015.

He said, however, that he had no evidence for this suspicion, when he gave testimony to the Northern Assembly’s public accounts committee on Wednesday evening.

The RHI scheme was introduced in 2012 by the then Department of Enterprise, Trade and Investment (DETI) minister Ms Foster when Dr Crawford was her special adviser in the department. The fallout from the scheme resulted in Northern Secretary James Brokenshire’s collapsing Stormont and calling elections for March 2nd.

Dr McCormick said that when the eco-friendly scheme was introduced, civil servants failed to detect that the scheme, which paid out £1.60 in subsidies for every £1 spent by users, was seriously flawed.

He said however that in the summer of 2015, when former DUP MLA Jonathan Bell had taken over as the DETI Minister, that there were proposals to impose cost controls on the scheme.

Dr McCormick recalled a meeting that he, Minister Mr Bell, the then DUP DETI special adviser Timothy Cairns and two others attended in August 2015 when it was proposed caps be put on the subsidies.

Dr McCormick said that Mr Cairns forcefully insisted that the scheme should remain in place for a period and that ultimately Mr Cairns got his way.

Pressed by Alliance member of the committee Trevor Lunn, Dr McCormick said he believed, although he did not have direct evidence, that Dr Crawford in turn had put pressure on Mr Cairns to ensure that the scheme was not capped at that time.

Dr Crawford was then special adviser in the Department of Finance where at that time Ms Foster was minister. In a statement on Wednesday night Dr Crawford said he “would have been offering informal advice and assistance as a colleague to my successor [Mr Cairns] in the department and not on behalf of the finance Minister or the party”.

“However, as I pointed out to the BBC in December, I did not attempt to keep the RHI scheme open at the original tariff against the wishes of the Minister. Indeed, I specifically stated on 31st July, 2015 ,that the department, ‘will need to make changes from 1st October’,” said Dr Crawford.

It wasn’t until mid-November 2015 that cost controls finally were imposed on the RHI. However, before November 17th there was a spike in the uptake of the scheme. Between October 1st and November 17th, 2015, some 881 people joined the scheme at a potential additional cost of £485 million over the next 20 years.

In all through the lifetime of the RHI, which ended in February 2016, just under 2,000 businesses, farmers and others took up the scheme. Because of the lack of cost controls it could result in an overspend of up to £490 million up to 2036 to be borne by the Northern taxpayer.

Dr McCormick referred to the “blindness of officials” in failing to notice the flaws in the scheme. He said the then DETI minister Ms Foster would have had a right to expect her officials to have detected the failings in the RHI. No advice was given to Ms Foster by her civil servants about these flaws when she was Minister.

Dr McCormick also told the public accounts committee that ahead of the spike in applicants in 2015 there “was premature awareness of the potential for the tariff to be reduced and the message went within the sector, get in quick”.

Dr McCormick also told the committee that a meeting he held with former DETI Minister Jonathan Bell in December where Mr Bell wanted to review ministerial papers may have been recorded “without my knowledge or consent”.

The DUP Economy Minister Simon Hamilton is planning to introduce proposals before the Assembly formally dissolves on January 26th to significantly reduce the overspend.

“It is imperative that we put a tourniquet on the flow of money,” Dr McCormick told the committee.

Mr Hamilton separately announced on Wednesday that he plans to publish the names of those who availed of the RHI next Wednesday, the last working day of the Assembly before it is dissolved.