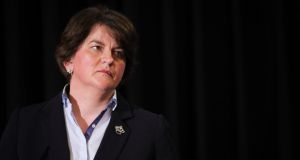 The North’s First Minister has insisted it is up to the UK government to fund a compensation scheme for victims of the Troubles which has been delayed amid deadlock over who should cover the estimated £100 million (€112 million) cost.

Legislation to provide a pension scheme for people who suffered physical or mental injury “through no fault of their own” as a result of the Troubles was introduced by the Northern Ireland Secretary of State in January, and was due to open for applications on May 29th.

“This pension went through the Westminster parliament, the regulations were set in Westminster,” Arlene Foster said on Friday. “Therefore we take a very clear view in relation to the funding.”

But the UK government maintains the scheme should be paid for out of Northern Ireland’s block grant – the money the Northern Executive receives from Westminster to fund public services in the North.

“The agreement as it stands is that this would paid from the bulk [block] grant that is with the Northern Ireland Executive,” the North’s Secretary of State, Brandon Lewis, told the BBC’s The View programme.

The Northern Ireland Victims Commissioner, Judith Thompson, said the delay was “shameful.” “People have died on the road to this place and more will die without seeing it if we don’t move,” she said.

Ms Foster said the Executive was “committed to delivering this pension” but “we do have to deal with the funding, it’s quite a lot of money and therefore we do need to be able to make sure that we can deliver.”

She also said the structures to administer the scheme – which it emerged this week have not yet been set up – would be implemented shortly. “The department will be designated in the very near future,” she said.

On Friday victims’ campaigners took the first step towards legal action against the Northern Executive over the delays in implementing the scheme.

Alan McBride, of the WAVE Injured Group, submitted a pre-action protocol letter asking for an explanation of the Executive Office’s failure to comply with the legislation requiring the introduction of a pension scheme.

Depending on their response, he said, “a decision will be made whether or not to go for a Judicial Review of the Executive’s conduct.”

Mr McBride, whose wife Sharon and father-in-law Desmond Frizzell were killed in the IRA bombing of Frizzell’s fish shop on Belfast’s Shankill Road in 1993, has campaigned for the payment for more than a decade.

“For far too long the severely injured have been the forgotten victims of the Troubles,” he said. “They have to live with the catastrophic life changing injuries inflicted on them.

“All they want is some recognition of the great harm that was done to them and these payments would do that and give them a degree of independence and dignity.

He said it was “shameful that some of the most vulnerable in society still have to fight for what’s right, but fight they will, through the courts if necessary”.

Mark Thompson, of victims’ group Relatives for Justice, said the cost of the scheme could run as high as £200 million, and this would “undoubtedly place a huge burden” on the Executive budget.

“The British government took all these decisions and then placed these on the desk of the incoming Executive and walked away.