Stormont crisis: It’s time to push the rock up the hill again

Analysis: DUP and Sinn Féin posturing will continue though there isn’t that much to talk about 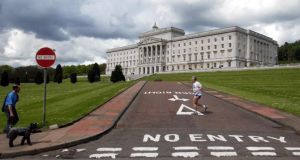 As expected there was much sound and fury at Stormont on Monday but by this Tuesday afternoon the hope of the British and Irish governments is that the mood will shift from one of recrimination to problem-solving.

Peter Robinson certainly concentrated minds by his decision to boycott meetings of the Northern Executive save in “exceptional circumstances”. This will halt Executive meetings as they can only go ahead with the say-so of both Robinson as First Minister and Martin McGuinness as Deputy First Minister. Departmental work will continue as Ministers can operate semi-autonomously.

Robinson also raised the stakes by threatening “as a last resort” to pull himself and his Ministers out of the Executive if it is clear the talks beginning on Tuesday afternoon are going nowhere.

Under current legislation such a move should trigger Assembly elections. But again Robinson made clear future politics wouldn’t be so facile. Even if there were elections he said the DUP would not engage in selecting a new Northern Executive until it was established it could be fully functioning – unlike the present administration.

Sinn Féin couldn’t, and didn’t, get over-excited by this act as in 2008 they pulled the exact same stunt by refusing to attend Executive meetings in order to prompt moves toward the devolution of justice powers to Stormont, as happened in 2010.

Robinson by his act has set the stage for Tuesday’s talks which are set to run for four to six weeks, although, as is well documented, Northern politicians generally don’t do deadlines. But yet what he has done is peripheral to the real business – and that is determining whether Northern politicians are capable of providing a stable administration.

Here the Northern Secretary Theresa Villiers has also concentrated minds by her threat to haul back responsibility for welfare from the Northern Executive.

Such an encroachment on Stormont’s devolutionary powers might indicate to the North’s 108 Assembly members that there are only so many crises an administration can bear.

Much more of this and the p45s might have to be distributed.

It must be with a weary heart that Villiers and the Minister for Foreign Affairs Charlie Flanagan will gather at Stormont House with the North’s five main parties.

The hope of the two governments is that this time they will have more success than poor old Sisyphus who always saw the boulder roll back down again.

There will be a lot of talking – and manoeuvring and posturing, as happened on Monday – over the coming four weeks or so. But really there isn’t that much to talk about. It’s about resolving the deadlock over welfare reform and dealing with the issue of the murder of Kevin McGuigan and the status of the IRA.

The issues are difficult but not that complicated. The Stormont House Agreement of last Christmas is being held up because Sinn Féin, and the SDLP, in the spring said they would not live with the welfare cuts David Cameron’s government is implementing throughout Britain and Northern Ireland.

There is absolute logic to Sinn Féin opposing these but there seems to be no logic in its apparent willingness to bring down the Executive and Assembly over welfare reform. Welfare change is a key ideological plank of the Tory government and it just seems beyond the bounds of reasonable political expectation that Sinn Féin - which doesn’t sit in the House of Commons where such ideological battles are fought - could hope to shift a UK-wide strategy.

Why not continue to fight that particular battle but let Stormont get on with its business?

Sinn Féin by its stance is holding up the rest of the Stormont House Agreement, and that includes mechanisms to address the past, £2 billion in extra money to run Stormont, a reduction in corporation tax and measures to promote jobs investment.

Moreover, the Stormont agreement offered a substantial £564 million over five years to mitigate the effects of welfare cuts in Northern Ireland - money that several British MPs said they would “kill for”.

McGuinness said that Villiers’ welfare threat was a “huge mistake”. Yet, in a sense, she has made life easy for Sinn Féin. If Westminster does take back responsibility for welfare then it should mean that the rest of the Stormont agreement could proceed.

Sinn Féin, and Dublin to a degree, would effect to be annoyed but in such a scenario Sinn Féin at least would have someone to blame, while the welfare issue would be taken from its hands.

The alternative is that in these talks Sinn Féin grudgingly acquiesces to welfare change to allow the positive benefits of the Stormont agreement to be implemented - perhaps at the same time prising some extra money from the British government, and further upsetting British MPs who see special preference for the devolved Northern administration.

So welfare is manageable if the parties are truly up for a deal. Which leaves the murder of McGuigan and the status of the IRA. The central issue is the allegation that Sinn Féin remains “inextricably linked” to the IRA and therefore linked to the murder.

Yet, the PSNI chief constable George Hamilton in his assessment said he accepted “the bona fides of the Sinn Féin leadership regarding their rejection of violence and pursuit of the peace process” and the party’s “assurance that they want to support police in bringing those responsible to justice”.

Somewhere in those words a resolution might be found in the coming period. But for that to happen Sinn Féin must bring something to the talks table to demonstrate there is no “inextricable” link.