Storm Francis: ‘We had roadworks, the virus and now this. What next?’

During Storm Francis 50 homes and businesses in Bantry, Co Cork, were damaged overnight with the local drainage system unable to cope with up to 25mm of rain falling in a two hour period. Video: Cork Safety Alerts / Bantry Fire Brigade 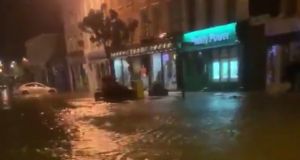 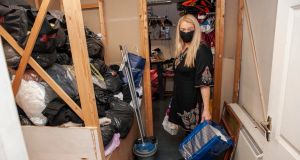 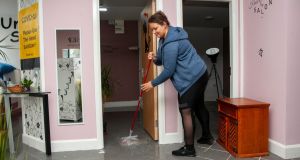 An elderly shop owner in Bandon, Co Cork, who has experienced his second major flooding incident at his premises in a matter of days, describes himself as a “broken man”.

Con Linehan opened his menswear business on South Main Street in the town nearly 30 years ago having worked for many years in Saville’s Menswear in Cork city.

He estimates that Storm Ellen and Storm Francis have cost him upwards of €20,000 in damage to his premises and stock in less than a week.

Business owners in the town were stripped of flood insurance in 2009.

A visibly upset Mr Linehan and his wife Ann find themselves in the position of paying for the damage out of their own pockets.

“We thought with the flood works that we were at the end of it. But obviously we weren’t. Last Thursday [with Storm Ellen] the place was absolutely destroyed again.

“Today was also shocking. It got all the stock rooms. All the fitting rooms were destroyed.

“We are trying very hard to keep this business going. I can’t change location because I own the building. Twice in the one week is unbelievable. We weren’t even able to get the shop right from the last flooding last week. The skirting boards are hanging off the walls. They will have to be replaced.

“This worry is always hanging over you all the time and at this hour of my life. Every brown penny I have has gone in to this business.”

Mr Linehan said that the flooding is yet another burden in a year which saw them closed for months arising out of the pandemic.

Business is slow since they reopened as men are not going to weddings or functions in large numbers.

Having been closed for months he still had to fork out for a €1,500 ESB bill and all other utility bills and accountancy fees still have to be paid even though more money is going out than comes in.

He has called on the people of Bandon to show solidarity with affected businesses such as his, saying that he is at the end of his tether following years of flooding.

Meanwhile, on North Main Street in the town Hungarian-born sisters Kathleen and Andrea Guth were mopping up the floor of their flood-damaged hair and beauty salon that they opened last year.

Andrea Guth said the business is in a prime location in the town. However, they have had a year from hell, with one setback after another, in their business which they set up after years of grafting in salons.

“We had roadworks, the virus and now this. What next? This is our first business. The location is supposed to be very good, but so much has happened. “

Kathleen Guth lives over the salon. As the water levels on the street rose she made heroic efforts to bring hairdryers, scissors, and boxes of products to her flat.

However, paint they had set aside to revamp the shop was ruined and the sisters fear customers will be turned off the salon because of the smell flooding causes.

“Luckily the manager and one of the girls got notification about it at 11.45pm. The drains are the problem back here.

“On previous occasions water would have come in front and back but it didn’t come in the front. When it came in it was a case of all hands on deck. A little bit of stock was damaged but it wasn’t as bad as other years.”

The store is an institution in the town with Aoife’s father opening the premises 57 years ago.

“The worst flood was 2009,” she said. “Five years ago we were flooded twice in three weeks. In 2009 we were closed for five months. I am glad we hadn’t gone ahead with getting the place all painted because we thought flooding was gone with the works on the river.

“You kind of think ‘where did all the money with the works go?’ How did they miss this?”

Stephanie Butler, who has worked at the shop for 40 years said that the multimillion euro flood works in the town had spared them the worst of previous storms.

However, she says that there is “huge disappointment” that there are still flaws in the defences to be sorted out.

“It is heartbreaking. There are a couple of homes as well which have been destroyed. I know of a house where the kitchen was ruined overnight because of the flooding.”

Cork County Council says the level of rainfall seemed to have overwhelmed the collection network.

Fianna Fáil Councillor Gillian Coughlan says that a compensation package needs to be put in place for business and home owners.

“There is no insurance. These buildings have been flooded time and time again. These repairs will have to come out of their own pockets. That is unsustainable. Year after year. I am calling on the Taoiseach to provide this emergency assistance package for families and businesses. Because these are family businesses,” he said.

Meanwhile, in Bantry in west Cork up to 50 businesses incurred flood damage overnight. The local main drainage scheme was unable to cope with up to 25mm of rain falling in a two hour period.

New Street, Main Street and Barrack Street were the worst affected in the flooding.

The town’s streets were turned in to rivers. At the Drinagh Co Op hardware store staff worked at a fever pitch to save stock.

Michael Coughlan, shop floor manager, says that it was “an unusual night.”

“The last time I saw flooding like this in the town was in 1988. I think the main drain in the town got blocked and it wasn’t able to take the force of the water. It actually literally bellowed up the streets as it came down.

“We had about four inches of water in the shop. It destroys your trade for the short term. Hopefully we will regain it again. We could do without this on top of Covid. But we have a good strong local community and people try to support each other at times like this.”

Terence Gibbs, owner of the Cosy Cabin, in Barrack Street in Bantry said that he was holding his breath waiting to see if the insurance company would pay out after his premises was destroyed overnight.

“It is not a cosy cabin now. It is a wet cabin. We had about 17 inches of water. I will be the first person to to welcome in 2021. I don’t want to remember this year. We are open six years and we ‘celebrated’ our anniversary with closed doors in July because of Covid.

“I have had TDs in here this morning and I have said ‘where is my golf membership?’ All they are doing is going to golf dinners. Even the captain of the Titanic had the decency to go down with the ship.

“There is tens of thousands in damage in this pub and I know the insurance company will do everything they can not to pay. Everything here is made of wood hence ‘Cosy Cabin’, so you can imagine the damage.

“I am a father of three kids. I love Ireland but I know I could make a better life for us abroad. I am asking Taoiseach Micheál Martin to help us. Where is he today?”

The Council Management Team convened on Tuesday to review the situation and will continue to monitor it.

Council response crews and contractors remain as a status yellow wind warning is in place for Cork until 7pm.

Following recent weather events, trees have been weakened and remain susceptible to further damage. Landowners have been asked to examine trees within their property for damage.

Dursey Cable Car will remain closed on Tuesday and will return to operation only when wind speeds permit.