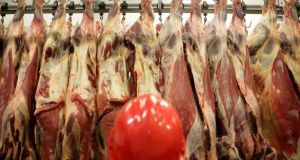 Testing commenced after a positive test among one member of staff. When others around him were tested, another worker was found to have the virus.

Two separate outbreaks of Covid-19 have been confirmed in factories owned by Larry Goodman.

Testing of the 350 staff at the ABP Foods plant in Clones revealed that two workers contracted the virus.

Testing commenced after a positive test among one member of staff. When others around him were tested, another worker was found to have the virus.

The process of testing the rest of the staff in the plant continues. The factory at Clones remains open.

In a statement, ABP said it is taking a number of actions on foot of the positive diagnosis and will continue to take direction from both the HSE and the Health and Safety Authority (HSA) in relation to the matter.

Last week ABP confirmed nine cases at its meat plant in Cahir which is the biggest in the country with 650 employees.

A worker was sent for Covid-19 testing and the company was subsequently notified of a positive test.

Following HSE testing of close contacts of the worker concerned, ABP was notified of an additional eight positive cases at the Cahir facility.

ABP has begun testing all staff members at the plant. The testing will be carried out by a private company in conjunction with the HSE to alleviate the pressure on local Covid-19 testing at this time.

ABP claims it has introduced a “variety of industry-leading protection measures for colleagues” which began on March 16th.

These included temperature checks at the entry to ABP sites, staggered break times, social distancing measures in canteens and detailed protocols for colleagues who display any symptoms. It also includes perspex partitions in communal spaces.

A further four cases have been confirmed at the Rosderra Irish Meats plant in Clara, Co Offaly.

The company said four staff tested positive on Friday, as part of a full test of 68 staff at the Clara site.

In a statement, Rosderra Irish Meats said: “The Edenderry site has already had a full site risk assessment screening test of over 400 staff where nobody tested positive.”

The Clara cases emerged as part of a programme of weekly testing introduced by the National Public Health Emergency Team (NPHET) for staff working in food processing settings.