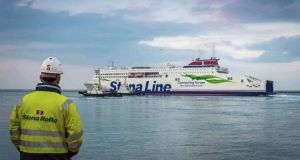 Both Stena ships will sail on Tuesday to alleviate the pressure on Irish transport companies and add capacity to direct routes to mainland Europe.

Shipping operator Stena Line is adding a second ferry on its direct route between Ireland and France from Tuesday to allow hauliers avoid Britain and Covid-related travel restrictions.

The company said it would be bringing forward plans to double the capacity and frequency of its direct sailings by two weeks from an original planned January 4th start date to cope with demand for post-Brexit freight traffic.

Irish lorries have become stranded in England and traffic has come to standstill at English Channel ports due to France’s ban on accompanied road freight.

The 48-hour ban, introduced on Sunday night in response to a new coronavirus strain in Britain, has forced Irish transport companies to look at alternative, direct routes to Europe to avoid the UK landbridge.

Stena Line, the largest shipping operator connecting Ireland and Britain, plans to add the Stena Foreteller ship to the Rosslare-Cherbourg service in addition to the Stena Horizon on that route.

Both Stena ships will sail on Tuesday to alleviate the pressure on Irish transport companies and add capacity to direct routes to mainland Europe to avoid disruption to critical supply lines.

“We are doing this to take up the extra demand for freight to go direct to the continent due to the issues in Dover to assist our customers,” said a spokesman for Stena Line.

The company was originally planning to add the Stena Foreteller with an additional 3,000 lane metres of freight capacity per trip to deal with an expected surge in demand for direct services to avoid controls and checks at the EU-UK border after Brexit comes into effect on January 1st.

The Stena Foreteller was operating on the Belfast-Birkenhead route but will now be moved to the 18-hour service between Rosslare and Cherbourg from Tuesday.

Danish shipping company DFDS has said that it is considering bringing forward the start of its new Rosslare-Dunkirk route, another direct route to mainland Europe but it will prove challenging.

“It is not likely that we will be able to have the tonnage available before January 2nd,” DFDS chief executive Torben Carlsen said, referring to the planned start date on the company’s new route to France announced in November.

France’s ban on accompanied freight from Britain to prevent the spread of a new coronavirus variant in London and the south-east England left up to 250 Irish trucks stranded in Britain.

Independent TD Verona Murphy said that there was not sufficient capacity on direct routes. Ships had capacity to take 90 roll-on, roll-off lorries to mainland Europe when there was demand for 400 trucks, she told RTÉ.

Eugene Drennan, president of the Irish Road Haulage Association, has advised Irish hauliers not to load any trucks unless they have a booking on a direct ferry to mainland Europe.

Transport companies and their representatives have been raising concerns, ahead of Brexit checks, about the level of available capacity on direct ferry routes between Ireland and mainland Europe if traffic congestion from new EU-UK border controls block the British landbridge.

“With Brexit on the horizon, the recently published IMDO report advises that there is enough capacity to link continental Europe with Ireland,” said Aidan Flynn, general manager of the Freight Transport Association Ireland.

“This is now a test of that capacity.”

Mr Flynn said that pre-Brexit stockpiling, busy end-of-year supply routes over the Christmas period and Covid-19 has created “a perfect storm” for the transport industry.