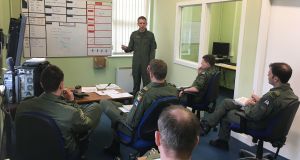 Capt Paul McDermott briefing his Air Corps pilot colleagues ahead of the Pilatus airplane flypast at the end of Sunday’s 1916 Rising commemoration ceremony at the GPO. Photograph: Peter Murtagh

On Sunday, the Last Post and Reveille will be sounded outside the GPO. The Tricolour, coupled with a drum roll, will be raised, marking the end of the 101st commemoration of the 1916 Rising.

The Army band will strike up Amhrán na bhFiann, and the crowd will sing. Capt Paul McDermott will hear none of this, however. By then, he will be flying 1,500ft over the Luas line at Dargan Bridge in Dundrum.

There, he will make last-second checks. Through his earpiece, he will be given the command from the roof of the GPO – “Eagle hack!” With that, he’ll be off, full pelt heading north, flying as Eagle One, leading a diamond-box formation – the first of four Pilatus PC9s, light grey and sporting the logo of the Irish Air Corps.

If McDermott’s timing is right, the flypast will happen 51 seconds from Dargan’s Bridge, just as the anthem is ending – the result of hours of planning, briefings and study.

Once finished, the four single-engine turboprop planes will head back to Baldonnel. There, the Air Corps, which has exactly half of the technicians it needs, is struggling to keep things ticking over.

“It’s very hard to plan maintenance,” says senior non-commissioned officer, Flight Sgt Michael Nugent, a 41-year veteran, “You are constantly juggling.” The Air Corps’s resources became front-page news after Coast Guard Rescue 116 was lost on March 14th, when it emerged that the Air Corps had been unable to provide top-cover, a mission then handed to the ill-fated helicopter.

The Air Corps has seven two-seater PC9s. Each is inspected before it goes out, and comes back. Each is inspected at the end of the day. That is 20 inspections every day. In addition, each gets a deeper service after 150 flying hours, and, again, annually. To do all of this, Flt Sgt Nugent needs 24 technicians. He has 12.

The Air Corps has always been the lesser-known branch of the Defence Forces. The Army has a broader reach across the country; the Naval Service’s reputation stands high after Mediterranean migrant rescues. By contrast, the Air Corps, which did not get their own aviator blue uniforms until the mid-1990s, is simply not as visible.

But this does not mean they are not doing things. . .

Charlie 253, the Casa maritime patrol and surveillance plane that was unable to give top cover (aerial oversight) off the coast of Mayo, is 23 years old and has clocked up more air miles than any Casa in service anywhere in the world.

Despite that, she trundles down the runway in Baldonnel, her twin turboprop engines emitting a healthy purr. Every now and then, the Spanish manufacturers ask about her, marvelling that she is still flying.

The aircraft’s longevity is put down, in part, to careful maintenance, including the regular washing of all moving parts to remove corroding salt.

Each year, it clocks up about 1,000 hours, close to the manufacturer’s limit. Her sister plane, Charlie 252, is in Spain since mid-February for a “deep” service that will put it out of action until June, at the earliest.

The Defence Forces’s White Paper two years ago commits to replacing the two Casas in 2019 with larger, more up-to-date surveillance and transport aircraft. Each will cost €50 million.

One is the Dutch trawler Frank Bonefaas.

The Casa is a flying spy. Corporals Paul McGee (30) and Keith Mooney (36) sit beside each other. McGee reads data from a large encased radar mounted underneath the Casa’s fuselage. Mooney is Tacco – tactical co-ordinator – and builds on McGee’s information using a powerful nose-mounted camera. The knowledge of both is supplemented by photographs taken by Airman Jamie Martin, who leans out an open window.

The plane flies low at 1,000ft, which strains the bodywork more than flying high. McGee’s radar sweeps the surface, relaying, through a snowstorm of green dots and streaks, images from the sea below. He clicks on an object and gives it a number, creating a template form on Mooney’s screen beside him where other details – vessel length, name, activity, etc – are entered.

Vessels over 15m are required by law to have a transponder to emit detectable identification signals. Almost all vessels comply. Those that do not, and hence appear on the radar unidentified, are automatically VOIs.

Bonefaas’s ID number – SCH 72 – is clearly visible. McGee and Mooney track several other vessels – including, 30 miles off the Donegal coast, a small blue and white trawler form Oban in western Scotland, and a tiny half-decker that looks to be 25 miles further out than it should be.

Over the next few hours, the Casa sweeps across the mouth of Sligo Bay, southwest to northeast, back and forth 1,000ft or less above the sea, hoping for sight of the bodies of missing Rescue 116 winchmen Paul Ormsby and Ciaran Smith.

Unfortunately, the search, like so many others since mid-March, is to no avail.

Speaking of the Air Corps’s inability to give top-cover back in March, he says: “The military is a ‘can do’ operation,” he says, “but we have to be careful that ‘can do’ and ‘will do’ doesn’t become ‘make do’.

“You can only do safely what you can do with the resources that you have,” he continues. Co-pilot, Commandant Fergal Ryan agrees. Staff shortages, he says, are having a serious impact.

“I don’t know an officer who isn’t double-jobbing [with other duties to carry out in the Air Corps],” he says. For nearly two years, it has been unable to provide a 24-hour service because of staff shortages. Rostering problems mean, essentially, that Baldonnel operates Monday to Friday, 8am to 6pm. The frustration is keenly felt throughout the command.

Former head of Air Corps’s Air Traffic Control (ATC) unit, retired Capt Diarmuid O’Riordan led the operation for five years, taking over immediately after staff numbers had fallen by half. Half of those who departed left in just a few weeks. He papered over the cracks, training staff to fill some of the functions, but unable to offer a full 24-hour ATC service.

While numbers eventually bounced back, and with them 24-hour cover at Baldonnel, they have slipped again. Since Christmas, full service has not been possible.

O’Riordan is now a commercial pilot and runs a consultancy company. Supportive of his former colleagues, he cites “one-size fits all” HR practices and a lack of lateral thinking to deal with technical staff shortages. The problems, he says, are not unique to the Air Corps.

Col Rory O’Connor, chief of air staff support, agrees. An airman seeking promotion has to complete infantry-standard training in the Curragh, even though the skills learned are not relevant to his, or her Air Corps career.

“They have to do these Army courses,” O’Connor tells The Irish Times, “we’d like to replace 24 weeks in the Curragh with an eight to 10 weeks technical course in Baldonnel.”

Keeping skilled and well-trained people is not all a question of money, says O’Connor: “If you have an organisation that provides for the needs and ambitions of individuals, and provides them with challenges, they’ll stay.”

On Monday, in part two of a series on the Air Corps, Peter Murtagh spends time with the Emergency Air Medical Service.