Organisation questioning why it should co-operate with audit process 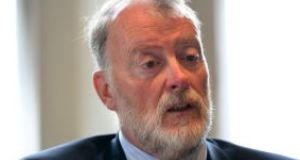 The €182,000 salary paid to John Pepper, group chief executive of St John of God organisation, is considered not to be compliant with public service pay policy due to the recent disclosures by the HSE. Photograph: Dara Mac Donaill/The Irish Times.

The St John of God organisation has suggested that the HSE has seriously prejudiced a forthcoming review into controversial additional payments made to its senior executives.

The HSE last week said its internal auditors would carry out an investigation into revelations that 14 employees had received payments of €1.64million in total in 2013 from the St John of God order “to discharge a possible future pension liability and contractual obligations”.

St John of God Community Services (Ireland) is a public service organisation - known as a section 38 body - and its staff are considered to be public servants. It is obliged to operate within public service pay rules. The HSE said that up until recent weeks it had no knowledge of these payments.

It also emerged last week that John Pepper, group chief executive of St John of God organisation, had a salary of €182,000. St John of God said because Mr Pepper left the public service in December 2013 the financial emergency legislation, known as Fempi, did not apply to him.

Another senior exective in the orgnisation is receiving a salry which is €15,000 peryear higher than the official rate for the post.

Last Saturday The Irish Times reported that the HSE considered the St John of God orgnisation not to be compliant with public service pay policy due to the recent disclosures.

It is understood that on Monday the St John of God organisation wrote to the HSE and argued that the HSE statement in The Irish Times had prejudiced the internal audit review.

It continued: “On Friday 8th July, the HSE stated to the media that the Saint John of God Order was not in compliance in respect of these payments. This statement was made before the review had even commenced and the Order believes such a statement is seriously prejudicial to a fair review.”

“Separately the Order is still awaiting a response from the HSE on this matter, following a letter it sent to the HSE on Monday of this week. The Order is very keen to co-operate fully with the HSE review once a fair and due process is followed.”

The Dáil Public Accounts Committee is due to question HSE director general Tony O’Brien on Friday on the background to the additional payments to staff at St John of God as well as the scandal at suicide bereavement charity Console.

Meanwhile the Minister for Health Simon Harris said he had no plans to place a HSE representative on the board of each section 38 agencies.