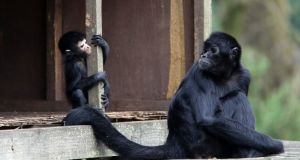 Fota Wildlife Park in Co Cork has announced the birth of a critically endangered primate, a baby Columbian Spider Monkey.

The baby was born recently to mum Batty and dad Arnold. The sex of the newborn is not yet known and therefore has yet to be named.

Batty had been keeping her precious new offspring quite close and hidden, but now both have been out and about and are on view to visitors to the park.

Colombian Spider Monkeys have a prehensile tail, meaning they can grasp or hold objects with it, which is extremely flexible and acts as another limb. These tails, along with their long spindly limbs, allow for incredible acrobatics in the canopy.

Spider monkeys are second only to gibbons in their agility up in the tree tops and their brain is twice the size of the brain of a Howler monkey of equivalent body size. Their large brain is thought to be the result of their complex social structure entitled ‘fission-fusion’ which occurs with other primates such as the chimpanzee, and their frugivorous diet which requires them to remember the locations of ripe fruit in the forest.

A benefit of their exceptional climbing skills is that they don’t have many natural predators, as being so high up in the trees, they are pretty difficult to catch.

Despite this the Colombian Spider Monkeys are classed as critically endangered in the wild by the International Union for the Conservation of Nature (IUCN). The species is under pressure from a high rate of habitat loss, due to deforestation and being targeted by hunters for meat or for sport.

“Births in the wildlife park are always special but the birth of such a critically endangered species is a joyous event and a great reminder of why breeding programmes in Wildlife Parks and Zoos are so important.”

Pubs not to reopen and restaurants will have to close at 11pm, Cabinet decides 18:33
Former TV presenter dies after car enters water in Co Down 18:02
Ireland needs to move to ‘zero-Covid’ policy to avoid catastrophe, scientists say 17:48
Coronavirus: 45 new cases but no further deaths reported in the State 17:46
Dublinbikes annual charge to increase by 40 per cent 17:40