Some 6,000 shamrock sellers in London for St Patrick’s Day 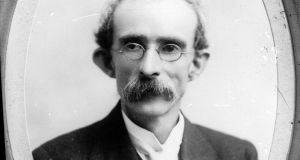 Dublin Metropolitan Police files noted that Thomas Clarke had not visited his shop on St Patrick’s Day. Supt Owen Brien said Clarke had an injury to his arm, the result of an accidental discharge of a revolver

The Irish Times gave extensive reportage to St Patrick’s Day celebrations at home and abroad. The paper noted that there had been no fewer than 6,000 shamrock sellers on the streets of London.

“There were few of the many thousands abroad who did not purchase either a little green flag or a bunch of shamrock,” it said.

Many well-known Irishwomen sold flags and were assisted by young women and children, the paper reported.

“We in Ireland are proud of what Irishmen have done, fighting side by side with Englishmen, Frenchmen, Australians, Canadians, New Zealanders and Belgians,” he told them, “and the consolation to all of you is that you have fought in the noblest cause that the tongue or the sword of man ever defended.”

The Dublin Metropolitan Police files noted that Thomas Clarke (right) had not visited his shop at 75 Parnell Street on St Patrick’s Day. Supt Owen Brien stated that Clarke had an injury to his arm which was the result of an accidental discharge of a revolver. “It is not quite healed,” he said.

An Irish concert was held at the Rotunda Rink at 8pm on St Patrick’s night. About 1,000 people were present, including Patrick Pearse and Éamon de Valera.

The event has been arranged to give people in the UK who have 1916 memorabilia the chance to have them digitised by experts for inclusion in a series of 1916 exhibitions that form part of the website, Inspiring Ireland.

Objects that will be digitised at the London event include GAA medals, photographs and an intriguing receipt that was issued by 10 Downing Street to the Admiralty Secretary of the Railways Communications Board for a diplomatic pouch sent from Dublin at the end of April 1916.

A second international Inspiring Ireland collection day takes place on April 17th in New York City. The treasures will be digitised and preserved in Inspiring Ireland which is powered by the Digital Repository of Ireland.

This means they can be enjoyed by people worldwide for the next 100 years.