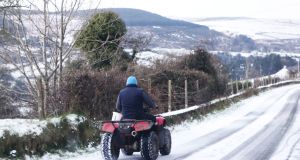 A yellow snow and ice warning is in place for much of the country on Thursday, with up to 5cm of snow forecast for some areas.

The Road Safety Authority has advised all road users to take extra care when using the roads for the remainder of the week.

A severe weather response meeting was held on Tuesday and Wednesday in preparation for the freezing conditions expected over the coming days.

Snowploughs and gritting lorries are “ready to be called into action” if freezing temperatures bring ice and snow to the capital’s roads, Dublin City Council said.

The Dublin Regional Homeless Executive has activated its Extreme Weather Protocol and has put in place contingency plans that will be operated for the duration of the status yellow advisory. Spare accommodation is currently available each night, with over 100 additional contingency beds able to become available if the weather deteriorates further.

Met Éireann said wintry showers over Ulster will gradually die out on Thursday morning and it will remain dry in much of Ulster and north Leinster.

Rain in the southwest will turn to sleet and snow, and will gradually extend northeastwards across Munster, Connacht and south Leinster through the day, with snow accumulations leading to some hazardous conditions.

Snow will turn to rain or sleet in southern and southwestern coastal areas later in the day, with highest temperatures between 1 and 3 degrees.

Sleet and snow will become largely confined to Leinster overnight, with rain persisting towards the south coast as temperatures increase here. Lowest temperatures will be between -2 and 1 degrees.

There will be some lingering falls of sleet or snow in Leinster on Friday morning, while rain will continue in southern and western coastal counties. A band of rain will move in across the western half of the country in the afternoon, possibly turning to sleet or snow in the northwest. Highest temperatures will be between 4 to 8 degrees in Munster, but staying colder across the rest of the country with highs of 1 to 4 degrees.

Friday night will be wet and windy as rain spreads countrywide, falling as sleet or snow in Ulster and parts of north and east Leinster. Rain will be heavy in southern coastal counties with a risk of some flooding.

Lowest temperatures will be 0 to 4 degrees generally, but less cold in the southwest with lows of 5 to 8 degrees. Southeasterly winds will be fresh to strong and gusty.

Saturday will also be wet and windy with further falls of sleet and snow in Ulster and parts of north and east Leinster at first, before transitioning to rain later.

Rain will again be heaviest in southern coastal counties, maintaining the risk of flooding. Conditions will stay cold in Ulster and Leinster with afternoon temperatures of 1 to 5 degrees, but turning milder in Connacht and Munster with temperatures reaching 6 to 11 degrees.

There will be further outbreaks of rain on Sunday, turning heavy and persistent through the afternoon. Highest temperatures will be 7 to 11 degrees, with coldest conditions in Ulster.

Current indications are for rain to continue in the east of the country overnight but becoming drier in the west of the country. Lowest temperatures will be 7 to 10 degrees in moderate southerly breezes.

Met Éireann said the outlook for next week is “very unsettled”, with further spells of wet and windy weather.