Arrivals to Ireland may have to book slot in quarantine hotel

Ministers to consider proposals for mandatory facility for passengers 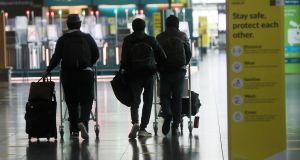 More than 5,200 Irish residents who arrived into Dublin Airport in a week said they had been on holidays despite the restrictions on non-essential international travel. Photograph: Brian Lawless/PA Wire

Passengers who arrive into Ireland may have to book a slot in a limited number of mandatory hotel quarantine places under proposals to be brought to Ministers next week.

Under proposals being discussed there will be a certain number of slots available in mandatory quarantine. Government officials have considered what to do with so-called “hard cases” if a backlog of demand builds up, similar to other countries that have such a regime in place.

Talks are ongoing to examine whether certain passengers could be prioritised to use the system, such as people coming home to care for a dying relative, people with limited life expectancy or travelling healthcare workers.

Senior officials are finalising legislation for the new regime which will see certain passengers ordered to stay in a hotel room for up to 14 days.

The mandatory quarantine at a designated facility will apply to all passengers from South Africa and Brazil, while other countries are likely to be added. Senior Government sources said that a general quarantine requirement for travellers from all destinations could also be introduced once the system is up and running.

The legislation, which was first announced by the Government two weeks ago, is expected to be brought to Cabinet next Tuesday and debated by the Dáil in the following days.

Under draft proposals, The Irish Times understands, once the passenger lands they will be taken to the designated hotel by private transfer. They will be ordered to remain in their room and will be banned from mixing with other guests, staff or security. Officials are also examining what should happen to travellers who cannot afford the hotel costs, and what penalties should be in place for those who “escape” early.

At the Fianna Fáil parliamentary party meeting last night, Taoiseach Micheál Martin told colleagues that Ireland was facing a prolonged period of suppression. He pointed to the slow pace of decrease in numbers, including those in hospital and ICU, while two senior Government sources cast doubt on suggestions by Tánaiste Leo Varadkar and the Minister for Housing Darragh O’Brien earlier this week that construction would reopen on March 5th.

Reopening of schools is likely to be prioritised, the sources said, while there is significant concern in Government about the extent of construction activity taking place under exemptions from the restrictions.

Last night, Mr Varadkar told Fine Gael TDs that Ireland cannot hope to have restrictions that can be compared with Australia and New Zealand. He pointed to the Border and the high number of cases in counties close to the Border.

Mr Martin also said the Cabinet would discuss increasing the fine for non-essential travel abroad from €500 to €2,000.

Mr Martin made his comments in the Dáil after a senior official said that more than 5,200 Irish residents who arrived into Dublin Airport in a week said they had been on holidays despite the restrictions on non-essential international travel.

Under the new scheme local authorities can apply for a capital grant of up to €250,000 for a project at a funding rate of up to 90 per cent.