Smallest and most endangered sea turtle found in Donegal 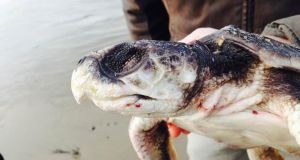 The Kemp’s Ridley turtle has been described as the world’s smallest and most endangered sea turtle. Photograph: Aoife Flynn

Coastwatch Ireland has confirmed identification of a tiny reptile washed up in Donegal as a Kemp’s Ridley – described by National Geographic as the world’s smallest and most endangered sea turtle.

The foot-long marine turtle with an unusual beak did not survive its landing on rocks of Rossnowlagh beach, and was found by Coastwatch volunteer Aoife Flynn on Christmas Day.

As all appropriate laboratories were closed, she photographed the reptile from all angles and put it in her deep freeze until an autopsy could be carried out.

It was initially thought to resemble a rare hawk’s bill turtle, but an autopsy conducted in recent days by a Letterkenny vet and Coastwatch regional co-ordinator Dr Trish Murphy identified it as a Kemp’s Ridley, which is found mainly in the Gulf of Mexico, but can migrate as far north as Nova Scotia.

Just over 40 of these have been recorded in Irish waters since records dating to 1748, and only 1,000 breeding Kemp’s Ridley females are believed to exist worldwide, due to over-exploitation of its eggs by man in past centuries.

They are known for their unusual “nesting processions”, called “arribadas”, where the females colonise entire sections of beaches to lay their eggs – having swum thousands of miles in some cases to return to their own birthplace.

As National Geographic described it, the struggle to sea by tiny hatchlings is “even more riveting”.

“Beset by predators, hatchlings make this journey at night, breaking out of their shells using their caruncle, a single temporary tooth grown just for this purpose,”the magazine says.

Their nesting grounds are subject to protective legislation. Fishing vessels have also used “turtle excluder” devices in their gear, but populations haven’t recovered.

Their life span is about 50 years if they are lucky, during which they growing to all of 2 feet or 65 cms in shell length, weighing up to 45 kilos.Favourite food is crabs and jellyfish, while they also have a penchant for munching seaweed.

Rossnowlagh, a well known surfer’s beach in Donegal bay, is not far from Murvagh where quantities of jellyfish were recorded for Coastwatch by Joe Gatins last summer and autumn.