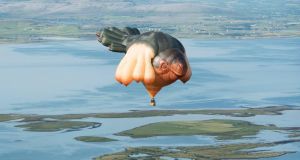 Galway Arts Festival’s visiting Skywhale drew hundreds of people to the city’s South Park on Sunday evening, after a week when the Atlantic weather systems had wreaked havoc with its flying schedule.

The 30-metre long inflatable cetacean designed by Australian artist Patricia Piccinini had become airborne on five occasions, but arts festival air traffic control had to ground it during gales and torrential rain mid-week.

Wind speeds above eight knots had proved too difficult for hot air ballooning, but the public did see the marine mammal inflated and tethered - with a dramatic full blown appearance for several hours over South Park on Sunday which attracted hundreds of spectators.

Described as a being that is “massive and wondrous and that exists somewhere between the impossible and the unlikely”, the many-breasted mammal loomed over the Claddagh until it was time to deflate.

That in itself became a high point, as small children and their adults worked furiously to gather up some 3,500 square metres of fabric with the Skywhale pilot and ground crew, led by Johnny Donnelly.

There was some indication on Sunday night that the balloon might extend its stay, depending on weather, and updates will be on the arts festival’s website at www.giaf.ieProving an ill wind does bring good fortune, there has been a record footfall through the festival’s visual art exhibitions – with Piccinini’s half-human sculptures at the Market Street art gallery proving particularly popular.

Her exhibition, entitled Relativity, continues during the second week of the festival, when theatre openings will include Samuel Beckett’s Lessness with Olwen Fouéré, and Jumpboard Productions’s Live Live Cinema, based on Roger Corman’s 1960s film, Little Shop of Horrors.

British-led Boycott the Human Zoo group had appealed to the festival to drop it from its programme, describing it as “racist and immensely offensive”, but the festival response was that it was a powerful critique and was anything but racist.

Among the Irish participants were James Akpotor and Sipathisiw Blessings Moyo, with the treatment of asylum seekers and inhumane handling of deportations from European states being a theme of Bailey’s work.

The Galway International Arts Festival and the Galway Fringe Festival continue until next weekend.