NUJ says arrests based on false claim, and calls for threat of prosecution to be lifted 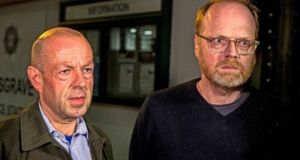 Journalists Barry McCaffrey and Trevor Birney were part of the production team behind the ‘No Stone Unturned’ documentary, which investigated the UVF massacre in Loughinisland, Co Down in 1994. Photograph: Liam McBurney/PA Wire

Tánaiste and Minister for Foreign Affairs Simon Coveney has been urged to raise the issues surrounding the arrest of two investigative journalists in Northern Ireland with the British government.

The National Union of Journalists (NUJ) made the call after revelations in Thursday’s Irish Times in relation to the detention of Belfast journalists Barry McCaffrey and Trevor Birney.

The two were arrested in August on suspicion of the theft of confidential documents from the Police Ombudsman of Northern Ireland’s office. The men were part of a team that produced No Stone Unturned, a Fine Point Films documentary by US director Alex Gibney.

The film examined the police investigation into the massacre of six men by the Ulster Volunteer Force in the Heights Bar in Loughinisland, Co Down, in 1994. The film addressed the allegation of RUC collusion in the killings and also named the chief suspects in the murders for the first time.

Following the arrests of Mr Birney and Mr McCaffrey, Durham Constabulary, which had been asked to take charge by the PSNI, said it was investigating a report of theft of documents from the ombudsman’s office.

However, the ombudsman, Dr Michael Maguire, has told The Irish Times his office did not report a theft.

Séamus Dooley, Irish secretary of the NUJ, said the statement “removed the central plank of the allegations” against the journalists.

“The threat of prosecution should be lifted, and a full explanation given to Barry and Trevor,” he added. “The context of this statement is important: two journalists were arrested, and the offices of a film production company raided on the basis of a warrant which the NUJ believes was granted in entirely unacceptable circumstances.

“Two of our members were humiliated by very public arrests amid a blaze of publicity, even though they were at all times available for questioning. The PSNI could simply have sought an appointment at a local police station.”

Mr Dooley called on Mr Coveney to raise the case with Northern secretary Karen Bradley “as a matter of urgency”.

“Neither the Irish or British governments should hide behind a flawed process now shown to be based on a false claim,” he said.

Sinn Féin policing spokesman Gerry Kelly said the PSNI had serious questions to answer over the arrests of Mr Birney and Mr McCaffrey.

“It is deeply disturbing to learn that in fact Police Ombudsman Michael Maguire had not made a complaint to the PSNI about theft. This revelation completely undermines the whole basis of the men’s arrests,” he said.

Mr Kelly said that “instead of the police taking action against those responsible for murdering these six people, they arrested the two journalists who exposed the evidence to TV screens across the world”.

Daniel Holder, deputy director of Belfast-based human rights group the Committee on the Administration of Justice, said his organisation had raised “concerns about the case of Trevor and Barry internationally”.

“The further information that has emerged since the arrests – including the revelation that no theft had been reported by the ombudsman – only give us further cause for concern as to what is at play here regarding freedom of the press and accountability for the past,” added Mr Holder.

The head of the Northern Ireland Human Rights Commission, Les Allamby, said “a free press is a cornerstone of human rights and democracy” and “any limitation of journalists’ freedom of expression must be human rights compliant”.

Mr Allamby said “the developments revealed by The Irish Times throw into sharper relief the challenges made by the journalists to the seizure of their material”.

Niall Murphy, of KRW Law in Belfast, said he would now seek to have the arrests declared illegal.

Durham police has stated that it can not comment on the matter “due to ongoing legal proceedings”.