An Taoiseach Leo Varadkar, responding to a question from Fianna Fáil leader Micheál Martin, has said that nurses and doctors should not take holidays over the Christmas period to help ease hospital overcrowding. Video: Oireachtas TV 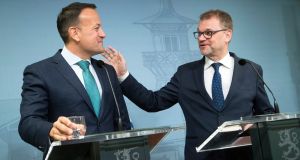 Opinions ranged from a view that Mr Varadkar’s remarks came from the “floggings will continue until morale improves” school of management to the belief that the Taoiseach was not tackling the real problem; if hospitals are to become full-time, 24/7 service like emergency departments, then the entire health service has to be staffed appropriately at all times, even Christmas and New Year.

Despite record levels of funding being signed off for the health service, the country’s hospitals are heading into the bleak winter period when demand for healthcare support will reach its highest level.

Last Christmas there were records levels of hospital overcrowding and the number of patients on trolleys reached more than 700 patients on occasions during the 2017-2018 winter.

Planning then did not go smoothly. The Irish Times reported on Tuesday that special Government funding came too late in the year to be effective and this year a final plan for dealing with additional pressures on services was only now being finalised at the Department of Health.

Frontline medical staff feel that the Taoiseach questioning the amount of annual leave they take was unfair when he should be addressing an underlying problem in the service: that there is nothing specific to Christmas services about the shortages of resources in the Irish health service.

“To suggest that if we worked more of the weekend, it would solve the trolley problem – that is absolutely ridiculous,” said one medical consultant who did not want to be named.

She pointed out that the “road block” in hospital wards came from a reduction in outpatient and community-based services. Patients might be medically fit to be discharged but reduced services in “allied healthcare” such as physiotherapy or occupational therapy or in nursing homes means patients can be stuck in hospital beds for weeks longer than they should, creating a backlog over Christmas.

Dr Emily O’Conor, president of the Irish Association of Emergency Medicine, said she would be working a 24-hour shift on Christmas Eve next month. The problem was not within emergency departments, which worked 24 hours a day, 365 days a year, but across the wider system, she said.

“Much of the rest of the health service was set up to deliver most of its care Monday to Friday during office hours. There is a long-established disparity flow through the system,” she said.

Dr O’Conor said it was “very unfair” for the Taoiseach to focus on frontline hospital staff which has no ability to manage the flow of new patients and that he should instead look at other healthcare areas.

“You cannot expect what is currently a five-day a week resourced service to suddenly become a seven-day service just like that.”

She felt that focusing on emergency staff was “inappropriate”.

“There is a feeling that many parts of the health service are winding down over Christmas and that emergency medicine feels quite unsupported during the extended holiday periods,” she said.

Elaine Barker, physiotherapy manager at Tallaght University Hospital in Dublin, said the level of inpatient physiotherapy services are the same at Christmas as any other time of year, though there is a reduced outpatient service to allocate fewer resources towards fully covering inpatient services.

“The Taoiseach is referring to a challenging period where we want to get patients home but I think all frontline staff are working as hard as they can with the resources that are available,” she said.