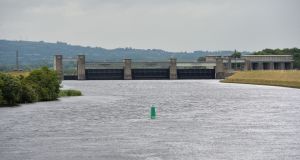 Parteen Weir on Lough Derg is part of the Shannon water system. Irish Water plans to build a 170 km long pipe from the Parteen basin on the river Shannon to Dublin. Photograph: The Irish Times 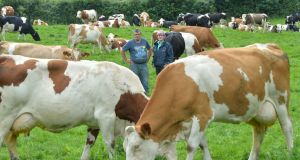 Liam and Marian Minehan of the Fight the Pipe campaign, in the field on their Co Tipperary farm where the proposed Irish Water pipe is to be laid underground. Photograph: Alan Betson

Desperate times call for desperate measures, no more so than in Dublin in 1893. A drought that began in March and continued for most of the year prompted one letter writer to this newspaper to suggest using explosives to burst clouds over the Phoenix Park.

“We all can perceive every evening the thick black masses of rain-cloud gathering over the city and suburbs, threatening to fall every instant, but still failing to come down,” the author, signed as ‘A Citizen’, wrote.

“Now, I think this condition of the atmosphere would furnish a splendid opportunity for testing the power of dynamite as a rain producer..,” the writer said.

Several months later,the extreme conditions inspired another Irish Times contributor, named WIR, to write a poem, entitled Water, which began:“The crisis past, we may at last/ Rest easy in the hope/That such a year may not appear/Within life’s fickle scope/That years galore may pass-or more/Ere we an equal drought/Shall have, or see, as Ninety-Three/So fraught with fear and doubt !”

In a recent trawl of newspaper archives, Dr Conor Murphy of Maynooth University and colleagues found plenty of examples to confirm their belief that droughts have been far more common than floods on the island over the past two centuries and more.

Their “drought catalogue” records hundreds of episodes over 250 years, with three significant periods of persistent dry weather – from September 1800 to January 1809, during 1887, and in Dublin for much of 1893.

The 1887 drought was “one of the most intense, island-wide” events during those 2½ centuries, Dr Murphy says in an article for the scientific journal Weather. Crops failed, and there were public health concerns about the state of sewers in Dublin due to lack of water to flush the system.

A circular issued by the Bishop of Meath and published in this newspaper on July 2nd of that year authorised the faithful to pray for rain. The prayers were eventually answered with cloud bursts that November.

Dr Murphy, who is based at Maynooth University’s Irish climate analysis and research unit (Icarus), says that the weather events of the past 30 to 40 years were “not really representative” of the long-term trend.

“We think of recent flooding, but the hard winter of 2010 also tested the resilience of our water-supply system,” he says. “Dublin is operating at the edge of its capacity, without even factoring in climate change.”

“To find a suitable location would be difficult, and the environmental problems would be enormous,” he says.

“Taking water out of the Shannon is not going to leave long-term scars on the environment,” he says, as it will involve extracting from the lower reaches of the river.

The extraction as planned involves 2 per cent of water channelled to Ardnacrusha and this will have no impact on the old Shannon river route, Prof O’Donoghue contends.

He believes construction could be far less disruptive than feared by landowners, as contractors would work simultaneously at various points along the 170km route from the Co Clare border to Dublin.

Farmer Liam Minehan of Fight the Pipe says that many of his neighbours had already suffered during construction of the new Dublin-Limerick motorway, with compensation never adequately covering the long-term impact on soil and on lost income.

He questions why a route under the motorway could not have been chosen in the first place if it had to be built at all.

However, Prof O’Donoghue says that a submotorway option would not provide sufficient space for maintenance.

The RSPA maintains that fixing the leakage rate of over 40 per cent in Dublin’s water distribution network and sourcing extra raw water from existing groundwater supplies should be the focus.

The alliance also says that Irish Water is “exaggerating” figures for projected shortages by including an extra 100 million litres a day for industry.

The RSPA, involving farmers and stud farmers, tourism and business interests, has also queried why desalination made it to the final list of two options – the other being Parteen Basin – but was then ruled out.

Although costly, it is becoming less expensive as technology improves, it says. It quotes Israeli desalination expert Prof Raphael Semiat as stating last year that “pumping a cubic metre of fresh water distances of more than 200km requires more energy than desalinating the same amount of seawater”.

“That’s why it tends to be used in richer energy-rich countries like Israel and the US west coast,” he says. “A desalination plant, built in somewhere like north Dublin, would still require a linking pipeline to the city,” he says.

Desalination also has environmental consequences, he says, but research is continuing in countries such as Israel and “costs may ultimately fall”.

Prof Bruen confirms that there is a considerable supply of raw water in the Kildare aquifer, the largest sand and gravel aquifer in the area.

“The problem is that you would never take it out in a sustainable way because it feeds into the Pollardstown fen,”he says.

The calcareous fen or area of alkaline peatland nourished by calcium-rich spring water is on the northern edge of the Curragh, several kilometres from Newbridge, Co Kildare. It is 60 per cent State-owned and is a special area of conservation, with rare vegetation and several species of whorl snail.

“The classic response taken by Dublin to provide supply in the past was to build reservoirs in the Dublin mountains, but this would be horrendously expensive now and would require flooding quite a lot of land,”Prof Bruen says.

Although he believes the original Bord na Móna proposal to construct a reservoir in the midlands had merit, Prof Bruen notes that even when Dublin City Council was researching future supplies, the Shannon option “looked the best”.

“Taking it downstream of Lough Derg makes most sense, as by that stage the river comprises rainfall run-off from quite a considerable amount of land along the river route,” he says.

“So there is a smaller fraction of the overall and far less impact on Lough Derg itself.”

What is not clear to Prof Bruen is how the ESB feels about supply drawn from Parteen Basin which would be used for hydroelectricity in Ardnacrusha – even if it is a fraction, at 2 per cent, of available water.

Irish Water is still in consultation with the ESB, among other stakeholders, and neither body could comment on the overall impact at this point.

Both also said that “abstraction from hydro-power facilities is common practice worldwide for enabling sustainable availability of water for use by communities and industry”.

Another key stakeholder, Inland Fisheries Ireland (IFI), accepts that the current route identified by Irish Water “should facilitate flexibility in choosing suitable watercourse crossing points, so as to minimise potential impacts on fisheries – particularly in relation to spawning and nursery areas”.

However, it has submitted a number of concerns about the project, relating to impact of drilling, biosecurity and possible introduction of alien species.

There are at least 14 alien species in the river Shannon, IFI says, and so abstraction and treatment of water “must be such as to ensure that all life stages of invasive species which may gain admission to the treatment works are destroyed”.