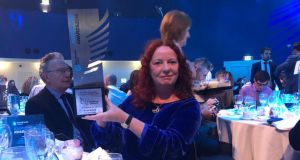 Journalists from The Irish Times won seven awards, more than any other publisher, at the 2018 Newsbrands Ireland journalism awards.

Rosita Boland won overall journalist of the year and scoop of the year for her work on the death of school girl Ann Lovett in 1982 in Co Longford which included an interview with the deceased’s former boyfriend Ricky McDonnell.

Speaking at the ceremony at the Mansion House in Dublin, Jerry Kennelly, chairman of the judging panel said Boland’s work “helped amplify on one of Ireland’s most unexplained scandals of the 1980s”.

“For 34 years milestones like anniversaries – tenth, twentieth and thirtieth commemorations – were used to mark an occasion rather than explain the tragic death of the 15-year-old school girl and her infant son,” he said.

“That was until May 5th of this year when Ann’s former boyfriend Ricky McDonnell spoke openly for the first time on the background to and the circumstances surrounding one of the saddest stories in recent Irish history.

“The poignancy of the interview set against the background of a 50th birthday last April that Ann could never see provoked an amazing outpouring.”

He said her work helped to explain a story largely “left in suspension for three decades”.

Fintan O’Toole was named broadsheet columnist of the year for the second year in a row. His winning entry featured columns on abortion and US president Donald Trump.

Conor Lally won the broadsheet features award. His entry contained features on the Kinahan-Hutch feud; the killing of Garda Tony Golden and drug dealing by rickshaw in Dublin.

Fiach Kelly was named political journalist of the year, with his entry including stories on Brexit and the presidency.

Sally Hayden received the award for best foreign coverage after submitting an entry with stories on topics such as Boko Haram and Syrian refugees.

Mark Paul and Colm Keena won the award for business story of the year, disclosing on December 23rd last year that the Office of the Director of Corporate Enforcement had asked Independent News and Media’s then chairman Leslie Buckley to explain who gave a British-based security company access to the newspaper publisher’s internal IT system.

Mr Crowley called on the Government to support measures to ensure the journalism industry survives including VAT reductions, reforming libel laws and a designated Minister for Media, which he said “are no different to supports which are readily available in other EU countries”.

“Our campaign has initially resulted in the maintenance of the 9 per cent VAT rate for goods and newspapers and the reduction from 23 per cent to 9 per cent for VAT on digital publications for which we are grateful,” Mr Crowley said.

“Hopefully this development is a first step and that step we will see more in next year’s budget with further progress in this regard.”