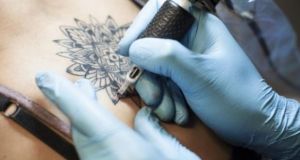 There is no published data in Ireland on the prevalence of tattoos but a review in the medical journal The Lancet showed that up to 36 per cent of people under 40 had at least one tattoo.

The fashion among children and younger teenagers for tattoos and body piercings may be coming to an end with the introduction of a Bill to ban the practice for anyone under 18s.

Fianna Fáil TD Mary Butler has introduced the Regulation of Intimate Piercing and Tattooing Bill which aims to fill what she called a “clear legal void” in the sector.

Ireland has no specific legislation on the regulation of tattooing and the body piercing business and the Bill if passed would be the first oversight of the sector, strengthening health and safety obligations.

The Bill provides for the prohibition of tattoos for anyone under 18 and it bans intimate body piercings for that group too including to the tongue or breasts. But teenagers can still get their ears, noses, navels and eyebrows pierced as they are not covered in the legislation.

Ms Butler pointed out that “intimate body piercing for children has been banned in Wales amid fears it can lead to health issues and make young people vulnerable to abuse”.

There is no published data in Ireland on the prevalence of tattoos but a review in the medical journal The Lancet showed that up to 36 per cent of people under 40 had at least one tattoo “with many being first inked between the ages of 16 and 20”.

The Waterford TD added that studies had found complications were reported in more than a quarter for body piercings of those aged 16 to 24.

Ms Butler, who said her husband is a tattoo enthusiast, added that getting one was a lifelong decision.

She accused the Government of failing to keep pace with the explosion of interest in the past decade in tattoo and body piercing.

“The risk associated with tattooing and body piercing can range from acute infections to allergic reactions and can occur when the piercing or tattooing equipment becomes contaminated.”

There were risks as well with disposal of needles and the same conditions should apply in such shops as in any medical setting.

She added that the majority of tattoo and body piercing parlours operated to high standards and they would welcome regulation that will remove rogue operators.

The legislation however is a private member’s Bill and as such has greater challenges to get fully debated or passed.