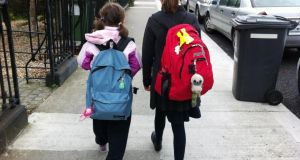 The cost of sending a child to secondary school has climbed by more than five times the rate of general inflation and is now just under €800, according to a survey to be published by Barnardos on Tuesday. Photograph: Bryan O’Brien/The Irish Times.

The cost of sending a child to secondary school has climbed by more than five times the rate of inflation and is now just under €800, according to a survey published by Barnardos.

The survey of 1,400 parents adds up the average cost of books, uniforms and voluntary contributions and puts the back-to-school costs for first year pupils at secondary school at €785, up €50 on last year.

The survey shows that while the cost of uniforms and shoes have fallen across all age groups year on year, school books and voluntary contributions have jumped sharply at both primary and second level.

The cost of shoes and clothes for a senior infants pupil is put at €150 compared with €165 last year, while parents of a child in fourth class will spend €170 on those items, down from €180 last year. The cost for a child starting secondary school is €255, down €5 on last year’s figure.

However, the cost of classroom resources , books and voluntary contributions have continued to rise.

“This summer, survey after survey has told us the true cost of Ireland’s supposedly ‘free’ education. It is time we said enough is enough,” Barnardos chief executive Fergus Finlay said. “It is very clear our education system is underfunded and under-resourced and there is an unfair expectation that parents will plug the gaps.”

He said Barnardos had been speaking to parents for the past 10 years and “they have consistently told us about the sacrifices they have to make to ensure their child has everything covered”.

“ They have told us they have to forgo paying essential bills, drastically reduce spending on food and very many are forced to borrow heavily and get into debt.”

“Frustratingly for us, and even more so for parents, we are hearing the same complaints; textbooks changes, new editions and the use of workbooks result in an inability to reuse books, adding to the bill,” she said. “The refusal of many schools to adopt generic uniforms instead of crested items from specialised shops remains a bone of contention for many”.

She said parent pressure has led to the expansion of the school book rental schemes in primary schools in recent years and seen some schools reviewing their uniform policy but stressed that “it is not nearly enough. Too many families are buckling under the pressure, which hurts parents and children.”

Mr Finlay said Barnardos had provided the Government with a costed solution – an investment of just €103.2m would deliver free primary education.

“The Government has no more excuses. For the first time in years, there is an expected surplus available in Budget 2016,” he said. “What better way to spend it than invest in education – improving outcomes for our children, educating our future workforce and more immediately, relieving the annual financial pressure parents face every September.”

He said providing all books, free transport, removing the voluntary contribution and classroom resources fees “would be a true indication of the Government’s commitment to tackle educational disadvantage.”