Self-harm figures remain much higher than before recession 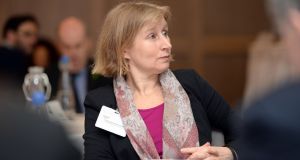 Director of Research at the NSRF Prof Ella Arensman said the latest figures indicate that the rate of self harm remains 9 per cent higher than in 2007. Photograph: Eric Luke

The number of people who are presenting at hospitals after self-harming remains almost 10 per cent higher than before the recession,according to a new report.

According to figures released on Friday by the National Suicide Research Foundation (NSRF) in its National Self Harm Registry Report, 8,791 people presented a total of 11,189 times at hospital emergency departments across the country due to self harm in 2015.

The rate of individuals presenting to hospital following self-harm was 204 per 100,000 – essentially unchanged from that in 2014, though between 2011 and 2013 there were successive decreases in the self-harm rate, the report found.

According to Director of Research at the NSRF, Prof Ella Arensman, although the latest figures show a further stabilisation in the rate of self-harm in Ireland since 2013, they do nonetheless indicate that the rate of self harm remains 9 per cent higher than in 2007 and the start of the economic recession.

In terms of the age profile of those presenting following self harm, the report noted that there was a 15 per cent increase from 2014 figures in the number of men presenting in the 35-39 category where the rate of presentation went from 220 to 253 per 100,000.

According to the authors of the report, Eve Griffin, Prof Arensman, Christina B Dillon, Paul Corcoran, Eileen Williamson and Prof Ivan Perry, these rates imply one in every 139 girls in the 15-19 age group and one in every 181 men in the 20-24 age group presented to hospital in 2015 after self harm.

Prof Arensman, who is attached to the Department of Epidemiology and Public Health at University College Cork, said the report into self harm also found that there was considerable variation nationally in the next care recommendations for patients presenting at hospitals due to self harm.

“One quarter of self-harm patients were not provided with a referral option following discharge from the Emergency Department. Therefore, it is a key priority that guidelines for assessment and management people engaging in self-harm are implemented in all Irish hospitals,” she said.

For anyone affected by suicide or self harm or the issues raised in this story, please note that support is available from the Samaritans on Tel 116 123 or Childline at 1800 66 66 66 or from the following websites – www.aware.ie, www.yourmentalhealth.ie and reachout.com.