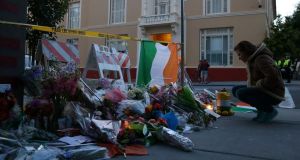 Five Dublin students and an Irish-American student were killed when the balcony they were standing on collapsed during a birthday party on Tuesday, June 16th. Photograph: Justin Sullivan/Getty Images

A second Irish student who was among the seven injured in last week’s balcony collapse in Berkeley, California that killed six others has been released from hospital.

Conor Flynn, from Mount Merrion, Dublin, was released from John Muir Hospital in Walnut Creek, California. He suffered a punctured lung in the fall following the balcony collapse.

The injuries suffered by the student were not as severe as those suffered by the others, though the individual’s injuries are such that they are unable to travel immediately by plane back to Ireland.

Mr Flynn is said to be staying close to friends in the San Francisco Bay Area as they continue their recovery.

Sean Fahey from Rathmines in Dublin was the first of the injured to be released. He had been treated at Eden Medical Centre in Castro Valley, California and was released on Monday. He has returned to Ireland.

Two other students being treated at Eden have been moved to other hospitals where they will be offered longer-term care and rehabilitation.

Niall Murray from Rathfarnham, Dublin and Clodagh Cogley from Clonskeagh, Dublin have been moved to separate hospitals in the San Francisco Bay Area.

Ms Cogley said in a post on her Facebook social media page yesterday that she suffered two collapsed lungs, a broken shoulder, a broken knee, five broken ribs and a broken spinal cord in the fall, “meaning the chances of me using my legs again are pretty bleak.”

In an upbeat post, the Dublin student added: “The thing I’m taking from this tragedy is that life is short and I intend to honour those who died by living the happiest and most fulfilling life possible.”

Two other students, Hannah Waters from Castleknock and Aoife Beary from Blackrock, who were critically injured in the balcony collapse, remain in Highland Hospital in Oakland, California.

The other students injured in the accident were Jack Halpin of Rathmines and Conor Flynn of Mount Merrion.

In a separate development, Alameda County District Attorney Nancy O’Malley will hold a press conference in Oakland this morning (California time) to outline the parameters of her office’s investigation into the balcony collapse and which parties it will investigate.

Ms O’Malley’s second-in-command, chief assistant district attorney Kevin Dunleavy, told The Irish Times that the investigation would examine whether a crime had been committed leading to the collapse.

The funeral of Mr Miller, the last of the students to be laid to rest, takes place today in Rathmichael Parish Church in Shankill, Co Dublin.

A joint funeral service was held for Ms Burke and Ms Donohoe in Cotati, California on Saturday. The funerals of Mr Culligan and Ms Walsh were held on Tuesday, while Mr Schuster’s funeral and the Dublin funeral of Ms Burke were held yesterday.