Search under way for fisherman missing off Co Clare coast 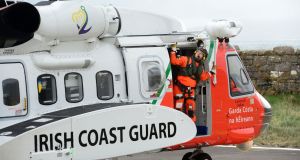 The Irish Coast Gaurd is searching for a man reported missing off the Co Clare coast. Photograph: Dara Mac Dónaill/File

A land, air and sea search is under way in Co Clare after a fisherman was reported to have been swept into the sea on Saturday morning.

It is understood the man, aged in his 40s, was fishing in the Pulleen Bay near Doonbeg.

A second man is believed to have raised the alarm at around 9am. Gardaí­ and the Coast Guard were alerted and a major search began.

The Shannon-based search and rescue helicopter was sent to the scene while the Kilkee and Doolin units of the Coast Guard were also dispatched.

The helicopter has been searching along the coast between Kilkee and Doonbeg while boats are also searching Pulleen Bay.

Coast Guard volunteers and Gardaí­ are searching the cliff top and shoreline. The search is being co-ordinated by the Coast Guard marine rescue sub centre in Valentia.