Former billionaire emotional when he addressed packed meeting in Cavan 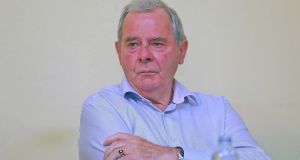 Sean Quinn told the community gathering he had run his company for 35 years in an honourable way.

Former billionaire businessman and bankrupt Sean Quinn has spoken publicly of a possible comeback to run the business empire taken from him almost seven years ago amid what he claimed at the time were hostile circumstances.

Addressing a packed meeting of about 600 people in Cavan on Tuesday night, Mr Quinn (71) criticised aspects of the management of his former cement and plastic business and said it needed “major capital investment”. He said he was “still fit” and “still keen” to run the business again.

A group of Irish investors backed by three US hedge funds bought Quinn group operations in Cavan and Fermanagh in 2014, saying they believed they had Mr Quinn’s “moral backing” for the deal.

In a subsequent letter to the main Irish shareholders of the firm, Mr Quinn claimed he had been treated in “a deplorable manner”.

Becoming emotional at times during Tuesday’s meeting, Mr Quinn told the community gathering he had run his company for 35 years in an honourable way and he recalled that he had been accused of “trying to commit fraud” against it. He also said he would post 140 pages of documents online in the coming days.

Asked from the floor about his plans and whether he would try to get back into the company, Mr Quinn said: “I’ve been trying all along. I have said at all times I wanted to buy the company. I wanted to buy all of it. I could have got the finance to pay the equity share because you can’t go into a company without what they call a bit of skin in the game.

He added: “Do I feel that if I was back in Derrylin (Co Fermanagh) in the morning that I could make a success of it? Yes. I don’t think there’s anybody would make a greater success of it and I think I would pay more money back to the bondholders than any man on this earth but it wouldn’t be easy . . . it needs major capital investment.

“I’m still fit, I’m still keen, I’m still determined and I know that with the support of the customers, the staff, the neighbours, the friends, the landowners, and I think it has all the support to make it as good as it could be made based on the position it’s in.”

Mr Quinn, the son of a farmer who later went on to become a billionaire and Ireland’s richest man, was jailed for nine weeks for contempt of court in 2012.

He and his son Sean jr, were jailed for their part in continuing to put assets beyond the reach of the Irish Bank Resolution Corporation after the former Anglo Irish Bank seized the Quinn Group in 2011.

Last month, the action by Seán Quinn’s wife Patricia and members of her family denying liability for some €2.34 billion in loans advanced by Anglo to Quinn companies was provisionally set for January next year.

A spokesman for Quinn Industrial Holdings Ltd said managmement of the company did not attend Tuesday’s public meeting.

“Management from the company did not attend the meeting, which unfortunately appeared to be set on airing inaccurate representations of the company’s prospects. Quinn Industrial Holdings DAC reported a 59 per cent increase in pre-tax profits last year, and this year has seen a continuation of the trend of increased turnover, profits, investment and employment. Due to the hard work of the company’s 830 staff the company’s long-term future is bright,” he said.