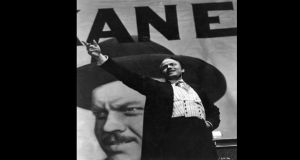 Star of Four Weddings and a Funeral, Simon Callow is among the actors who will attend the 60th Cork Film Festival which opens Friday night and runs for 10 days.

Callow is also a biographer of legendary American director Orson Welles and will introduce a screening of Welles’s last major film, F for Fake.

Cork Film Festival creative director James Mullighan said the festival was delighted to have Callow attend the screening which marks the 100th anniversary of Welles’s birth.

“Simon will give an extended introduction to F for Fake made in 1973 and he will also be on hand to sign third volume of his book on Welles’s life, One Man Band,” said Mr Mullighan.

Among the other highlights of this year’s festival is the Irish premiere of the Steve Jobs biopic starring Irish actor Michael Fassbender as well as Kate Winslet and Jeff Daniels.

Among the features being screened is a gala showing of Australian-Irish outback drama Stragnerland, starring Nicole Kidman, Hugo Weaving and Joseph Fiennes.

“Strangerland tells the story of a newly arrived family to an isolated outback Australian town and the subsequent disappearance of their children just before a massive sandstorm hits,” said Mr Mullighan.

“The film is notable for a powerhouse performance by Kidman but also for the eerie and beautiful cinematography by PJ Dillon, who is from Kerry.”

The festival closes with a screening of Todd Haynes’s 1950s lesbian love story, Carol, based on a Patricia Highsmith novel and starring Cate Blanchett and Rooney Mara.