Group may be open to legal action from a man who alleges abuse by a leader, expert says 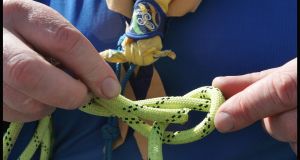 Scouting Ireland could face “extinction” from legal actions over its handling of child protection allegations, safeguarding expert Ian Elliott warned its board in January.

It may be “significantly exposed” to legal action from a man who alleged that as a young boy he was abused by a male leader. He has given notice that “he is intending” to sue, according to an initial review completed by Mr Elliott last year.

Gardaí investigated the allegation in the mid-2000s. The “well-known” volunteer was arrested, his home and local scout den were searched, but after a lengthy investigation gardaí did not press charges.

He was readmitted to the organisation having “lobbied extensively” to return after the decision not to prosecute was taken: “This was opposed by Scouting Ireland’s child protection staff officer at the time, but despite this he was readmitted,” Mr Elliott said.

According to Scouting Ireland’s files it appeared the man “had not kept the voluntary commitment he had given to abstain from scouting events, while under Garda investigation”, Mr Elliott said.

“Importantly in this case, it was known that the allegation that had been made against the volunteer involved sexual abuse,” said Mr Elliott. There was no evidence that efforts had been made to establish the details of the allegation, and it appears that no contacts took place with the alleged victim, he said.

Civil cases are being taken about incidents affecting numerous other organisations dating back several decades.

Mr Elliott told Scouting Ireland: “The settlement awards that are made can be considerable, often resulting in six-figure settlements.”

“Quite simply, if you fail to pay proper attention to establishing safe practice, the outcome could be extinction,” he said.

Last week, Minister for Children Katherine Zappone decided to withhold State funding of nearly €1 million to Scouting Ireland until concerns about governance in the organisation are resolved. The decision followed reports in The Irish Times on the handling of a 2016 allegation by a female leader, who claimed she was raped by a male leader seven years earlier.