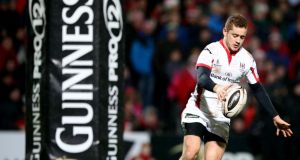 Ulster Rugby sponsorship: Bank of Ireland has a 20-year-relationship with the sports organisation, including as shirt sponsor. Photograph: James Crombie/Inpho

The long-time Ulster Rugby sponsor Bank of Ireland has welcomed the organisation’s announcement that it and the IRFU are to review their structures and education programmes after the termination of the contracts of Paddy Jackson and Stuart Olding.

The sporting bodies said in a joint statement on Saturday that their review of the players’ futures had concluded with the immediate revocation of the pair’s contracts. The organisations also acknowledged their “responsibility and commitment to the core values of the game: respect, inclusivity and integrity”.

On March 28th Jackson and Olding were cleared of raping a woman in Belfast in 2016; two of their friends were also acquitted of related charges. But some details of the trial, including WhatsApp messages between the players and their friends – including Craig Gilroy, who was not a defendant in the trial, but whom Ulster Rugby has now suspended for two weeks – were raised by sponsors of the sides, women’s rights activists and rugby fans, among others.

Ahead of the review’s conclusion Bank of Ireland, a key Ulster sponsor for two decades, had said it was “highly concerned regarding the serious behaviour and conduct issues which emerged as a result of the recent high profile trial”. After Saturday’s statement it said: “We welcome the in-depth review of structures and education programmes which has been announced . . . and look forward to the recommendations which arise being put into effect.”

“It’s only the beginning”

The head of Women’s Aid NI, Jan Melia, said it is arranging meetings with Ulster and IRFU officials to discuss the outcome of the review. “It’s a clear statement from them about behaviour of rugby players and a clear statement to women, too,” she said. “It’s a positive thing they have done, but it’s only the beginning.”

Last week Women’s Aid NI, Nexus NI and the Men’s Advisory Project announced they are using some of their funding to establish a new rape-crisis service for Northern Ireland.

Ms Melia praised Bank of Ireland and All State for funding its recent conference on domestic abuse’s impact on children but pointed out that Women’s Aid does not attract the level of corporate sponsorship that other charities do.

“We are asking Stormont policy decision-makers about funding, and we would invite any business sponsors interested in supporting our work to please get in touch,” she said.

Cara Cash-Marley, chief executive of Nexus NI, which has 800 people on its waiting list for specialist rape and sexual-abuse counselling, also said that it struggles to gain corporate sponsorship and that her team is ready to work with any organisation that wants to know more about the impact of sexual violence, and invest in education or staff training.

“We are also ready to work with those in IRFU and Ulster Rugby to support them in the review of their educational and professional offering,” she said. “We already have a suite of education and professional training programmes and are certainly open to conversations with colleagues in rugby.”