Scientists puzzled by arrival of invasive seaweed in Co Mayo 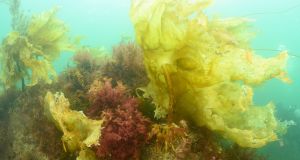 Researchers from NUI Galway are puzzled by the appearance of non-native seaweed on the Co Mayo coast.

It is the first time that the golden kelp Laminaria ochroleuca has been recorded growing in Ireland – it is normally noted in the warmer waters of southern Europe around Spain and Portugal. The furthest north it might be expected is France or the south coast of England.

Now scientists are appealing for divers and snorklers to report any other instances of the golden kelp around Irish coasts.

The dominant kelp species found in Irish waters is Cuvie Laminaria hyperborea and is found on all Irish coasts.

During a field survey a small population of golden kelp was discovered in a sheltered cove called Scots Port, on the northwest facing coastline of Belmullet, last September.

The species was originally recognised by Dr Kathryn Schoenrock of NUI Galway and samples were subsequently collected for genetic analysis at the University of Alabama at Birmingham by Dr Stacy A Krueger-Hadfield.

But the big question for Irish scientists is how did the golden kelp invader get to Scots Port?

Because Scots Port is located about 1,040 km away from the nearest population of golden kelp in the UK and about 1,630 km away from the nearest population in France, the exact pathway to Ireland is unknown. Genetic analyses hints at Portugal as a place of origin, said Rory O’Callaghan of Seasearch Ireland, a voluntary organisation for divers and snorkelers. Seasearch members record what they see underwater and submit photographs of items of biological interest.

“We are hoping that publicity generated by this find might encourage others to look more closely at seaweed forests so we can see if there is any more golden kelp out there.”

The most obvious path for the golden kelp to travel from Portugal would have been on a tidal stream, or it might travel as spores in fresh water tanks of a ship. But Scots Port is a small bay, not thought far out enough to be picking up things from tidal streams from Portugal.