Time for children to phone up and share their songs, poems, stories and . . . those lists 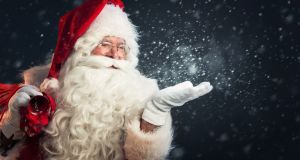 Santa admits he gets unusual requests from the children in Derry, but 'I do my best to fulfil them all'.

No matter how busy Santa gets in the run up to Christmas, he always makes time to talk to the boys and girls in the northwest of Ireland.

For the last 27 years he’s been able to speak directly to them from his home in Lapland, via a special satellite linkup with the BBC Radio Foyle in Derry which will allow local children to talk to Santa as part of a special Christmas broadcast this afternoon.

Each year, children phone into the station and share their songs, poems and stories – and of course their Christmas lists – with Santa.

Santa checks whether they’ve been good all year, and reminds them to tidy their rooms and get to bed early so that he has plenty of time to deliver their presents.

He also loves to share stories of life in Santa’s workshop in the frozen north, the mischievous elves, and how he can always rely on Rudolph’s nose to guide him to Derry on Christmas Eve.

It’s one of the highlights of the year for the station’s listeners and for the Mark Patterson Show team themselves – even though they still aren’t entirely sure how it happens.

“It’s all down to the broadcasting expertise of our engineer Ken Doherty, ” explains producer Brian Kernohan. “He seems to have a hotline to Santa which he’s been developing and refining over the years, which is then sprinkled liberally with Santa’s magic.

“We’ve been lucky so far in that it’s worked every year, with just a few hitches when the magic wears thin.

“You can always hear when the line to Santa is getting weak, and then Ken has to go out again and try and fix it, but we always manage to get it working again.”

Patterson agrees: “It is a huge challenge technologically. Ken is a proper engineer, he knows absolutely everything there is to know about broadcasting and is the person who keeps the station on air. He has a special satellite, and when we’re talking to Santa that’s when we know the magic is working.”

Ken has agreed to activate the satellite a few days early, especially for The Irish Times and uses his personal contact with Santa to request a rare interview.

Santa explains that, unknown to the rest of the Mark Patterson Show team, it was a chance meeting with Ken that led to his special connection with Derry.

“Ken came up to Lapland to fix some equipment for Radio Foyle, and that was when I met him,” explains Santa.

“I showed him my workshop, and he had the idea that I would like to talk to the children in Derry, Donegal and Tyrone. Ken told me how the boys and girls there are all so talented, and that they would love to talk to me, and he was right. “They’re always singing songs or saying poems for me, and they’re very good at tidying their rooms – well, so they tell me.”

In a rare insight into the reality of life in the workshop, Santa explains that even a few days before Christmas, letters are still arriving and he and the elves are working extra hard to make all the toys so that no children are disappointed.

“I do sometimes get unusual requests from the children in Derry, but I do my best to fulfil them all.

“One year a girl did ask me for a swimming pool and I had to explain that I would have a lot of trouble getting it on the sleigh.”

Santa says he has no worries about Brexit. “Borders aren’t really a problem for me because Rudolph knows his way and we fly through the air, so we can’t get stopped at checkpoints.”

Back in Derry, the Mark Patterson Show team are looking forward to another Christmas broadcast – and say they feel lucky Santa has chosen them.

“I remember one year when a child came on who didn’t want to talk,” says Patterson. “It was a wee boy who was really shy, and all of a sudden, he just said, ‘Santa, I love you’. It was magical.”

Santa will be live on BBC Radio Foyle today from 1.30-3pm. Listen on 93.1 FM, via DAB digital radio, or online at bbc.co.uk/radiofoyle