Rugby World Cup, Gay Byrne and ‘How to boil an egg?’ among Google most searched in 2019

Most searched in Ireland also included how to stop snoring, vegan recipes and Boris Johnson 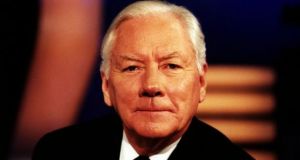 While Ireland crashed out of the Rugby World Cup at the wearingly familiar quarter-final stage again this year, Google searches for the Japanese showpiece proved to be considerably more enduring and it finished the year as the most searched for thing on the site.

Irish people took to Google in their thousands throughout October and November looking for highlights of matches from the pool games and stayed interested right through to the tournament’s last moments when South African captain Siya Kolisi delivered a rousing speech about the wider implications of his country’s victory over England.

Gay Byrne finished in second place in the overall search list following his death in November with searches for Brendan Grace, who also died this autumn, ranked fifth. Game of Thrones, Storm Lorenzo and the EU election results also finished in the top 10.

Google’s search trends reflected the sometimes turbulent times we live in and with Brexit rarely out of the headlines. “What is the backstop?” topped the “What is?” list, up from third place in 2018.

“How to vote?” was runner-up in that category behind the always important question “How to boil an egg?” in the “How to” list.

The top 10 recipe searches of 2019 offer a glimpse into Ireland’s changing diet with vegan recipes topping the list followed by keto, plant based, salmon, smoothie and the Happy Pear recipes featuring in the top 10.

The nation also turned to Google as it tried to figure out “What is Tik Tok?” and whether it should be keeping up with the trends and creating its own short-form mobile videos.

Other great mysteries of life Irish people sought answers for this year include “How to solve a Rubix cube?” at number five, “how to stop snoring?” at number seven and “how to get rid of spots?” at number 10.

Sports stars and politicians dominated the most searched for in the people list in 2019 with Shane Lowry finishing on top following his win at the Open Championship in July 2019.

British prime minister Boris Johnson was the most searched for politician in Ireland while US actor Luke Perry also made an appearance following his sudden death in March.

Celebrity scandals continued to keep Ireland searching, with Rebekah Vardy making the top 10 most searched for people as a result of the “Wagatha Christie” incident in September. The Kardashians also continued to keep people guessing with “How to pronounce Psalm?” trending in the wake of Kim Kardashian and Kayne West welcoming their third child.