Ronan McGreevy meets Maria Walsh on her last day as the Rose of Tralee and the new holder of the tiara, Elysha Brennan. Video: Ronan McGreevy 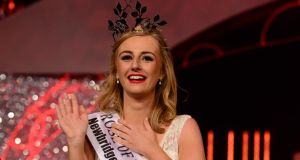 The newly-crowned Rose of Tralee Elysha Brennan (22) said she never believed in her “wildest dreams” she would win the competition, having been diagnosed with cancer three years ago.

She described her win as the “highest of highs”, with her cancer diagnosis when she was 19 the “lowest of lows”.

Ms Brennan from Bettystown, Co Meath, was shaking following her win. Though she professed to having been shocked to win, she was the strong favourite with the bookmakers.

She described participating in the competition as the “most amazing experience of my life, one that has given me experiences I’ve never experienced before”.

Ms Brennan said that the Rose of Tralee had been on her bucket list.

“To become a Rose was my Rose of Tralee. This has surpassed any hope, dream or aspiration that I have,” she said.

“This has been the best experience of my life.”

Ms Brennan said she paid no attention to the betting odds, which were as low as 1/3 at one stage.

She will now have to decide whether or not to defer her studies for a year.

“I’m just living in the moment right now. I just haven’t processed that I have [the tiara] on my head right now.”

Ms Brennan is a former student of Gormanstown College in Co Meath. In 2012, while resitting her Leaving Certificate, she was diagnosed with Hodgkin Lymphoma, a form of leukaemia.

An appearance on the Late Late Show surely beckons, after she confessed to being a big fan of the show and also of host Ryan Tubridy.