Rooskey residents insist they are not anti-migrant 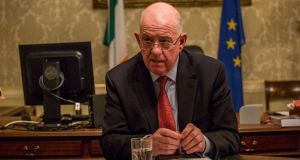 Minister for Justice Charlie Flanagan accused those responsible for Monday’s fire in Rooskey of showing “reckless disregard for the safety of human life”. Photograph: James Forde

Garda Supt Kevin English said on Tuesday he believed those responsible for the fire at the hotel on the Leitrim/Roscommon border, which was earmarked for use as a direct provision centre, had spent a number of days in the local area planning the attack.

“I’m satisfied that they had to be in the locality for a period of time keeping the hotel under observation and monitoring the movement of people to and from the hotel,” he said in a recording posted to the Shannonside website.

Monday’s fire was the second this year at the Leitrim hotel, which was due to open as an accommodation centre for 80 asylum seekers. The first arson attack was on January 10th and resulted in significant damage.

Two small fires were discovered by security personnel at the centre at about 9.54pm on Monday. They were quickly brought under control using fire extinguishers and there was minimal damage to the building.

Minister for Justice Charlie Flanagan accused those responsible for Monday’s fire of showing “reckless disregard for the safety of human life”.

In Rooskey, which has a population of just over 500 people, no one “has anything against refugees or asylum seekers”, according to local Fine Gael representative Andrew Reynolds.

“What the people of Rooskey are against is that these poor people are being put in a village that has no services or facilities to look after them.”

His sentiment seems to be shared by many locals in the Shannonside village, which straddles the border of Co Leitrim and Co Roscommon.

“Our grievance is not with the individuals who may be coming to Rooskey, our grievance is with how the entire process was handled,” Mr Reynolds said.

“I would like to have seen the department [of justice] liaising with local communities before issuing any contracts. Villages and towns have to be suitable, they need to be able to meet certain standards.”

Paul Healy, who grew up in Rooskey and is now editor of the Roscommon People, says these issues feed into the need locally for Shannon Key West to be reopened as a commercial hotel.

“It underlines why the local community are anxious that the hotel would reopen as a functional, commercial hotel and why people in the locality believe Rooskey needs an economic boost and its tourism potential to be revived,” Mr Healy says.

“We’re not unique in Rooskey, there’s lots of towns and villages that feel the same. But there would be an absolute sense that the political establishment has neglected areas like Rooskey.”

Mr Healy noted the lack of public transport, school places and GP facilities. He said there were no cafes, no restaurants and now no prospect of the hotel reopening. However, locals feel afraid of speaking about these issues incase they are painted as racist or anti-immigrant.