Proposal on nurses’ pay – what does it mean?

Average extra payment is about €1,200 with slightly more for nurses at start of career 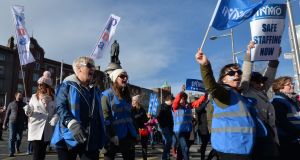 The executive of the Irish Nurses and Midwives Organisation will meet on Wednesday and, assuming it approves the proposals, these are expected to be put to a ballot of members. Above, a Dublin city centre protest on nurses’ pay and staffing levels on Saturday. Photograph: Alan Betson / The Irish Times

Nurses were seeking pay parity with groups such as physiotherapists who earn about €7,000 more. Will they get such increases under the Labour Court recommendation?

No. The new deal provides for additional money through a number of means such as changes to pay scales and new allowances.

However, the average additional payment will be about €1,200 with slightly more for younger nurses at the start of their careers.

However, there is a proposal for a future review of the nursing profession to be completed by the end of 2020.

This could hold out the prospect of further rises as part of the next overall public service agreement.

Will all nurses benefit for the new proposals?

It is understood that about 26,000 nurses and midwives (out of about 40,000) would benefit from the new proposals.

What is the biggest issue in the new proposals?

One of the main highlights is the establishment of a new enhanced nurse practitioner scale to which staff with certain qualifications will be able to move after three years in service. The exact qualifying thresholds remain to be worked out.

How much more would such nurses receive?

A nurse who was moving onto the fourth point of the existing pay rates and who moved over to the new enhanced scale would receive an additional €2,500 or about 7 per cent more. However, there is a bit of giving with one hand and taking back with the other in relation to this issue as some of this increase includes money which the individual would have received anyway under a previously announced Government initiative from last autumn for ending the two-tier pay system for those recruited since 2012.

Will nurses moving onto the new enhanced scale have to do more work?

The Labour Court recommendation says proposed new productivity measures will apply to all those moving on to the new higher-paid enhanced nurse practice scale.

These will form part of a new nursing contract to be negotiated over the next three weeks or so.

The new contract will allow for greater flexibility in relation to rosters, a review of skill mix and staffing in all areas such as ambulatory care and out-patient departments in hospitals.

The contract will also facilitate the shifting of work to the community, the introduction of new approaches to chronic disease management and support the implementation of reforms under the Sláintecare programme and the planned structural changes in the HSE.

Nurses would also co-operate fully with the implementation of a new review of healthcare assistants.

What other benefits are set out in the proposals?

The Labour Court recommendation includes some other proposals such as including that location and qualifications allowances be extended to nurses and midwives working in medical and surgical areas.

How much is all this going to cost?

The Government believes the proposed changes in the nurses’ deal to the initiative announced last year to tackle the two-tier pay system will generate savings that can be offset against the additional costs of nursing staff moving to the proposed new enhanced pay scales.

The Labour Court recommendation says that the cost of tackling the two-tier pay issue in the nursing sector under the Government’s original proposal last autumn was €30 million, with €23 million of this falling due in the first two years.

The Government also believes that the proposed new nursing reforms will reduce the €114 million it currently spends on securing nurses and midwives through agencies.

The executive of the Irish Nurses and Midwives Organisation will meet on Wednesday and, assuming it approves the proposals, these are expected to be put to a ballot of members.

The Psychiatric Nurses Association is expected to do likewise.