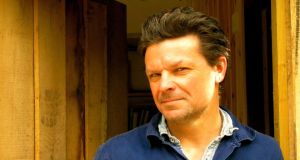 Rob Penn: “I couldn’t believe that in Ireland, the game of hurley was still being played with an ash stick.”

When Robert Penn was a boy, he grew to love the ash tree by the gate that led to the field where he played near his home on the Isle of Man.

It was a love that stayed deep within him. It led the boy become man to abandon life in London in favour of a home with its own woodland in the Black Mountains by the Welsh-Herefordshire border. It took him to Ireland, sparked by memories of childhood holidays in Oughterard where he went fishing with his dad.

And now these things, and much more besides, are contained in his book, The Man Who Made Things Out of Trees – the story of his love affair with the ash: “It’s always been my favourite tree,” he said.

Back in 2012, a book about a tree was unlikely to set pulses racing amongst publishers. But a book that told the story of man’s relationship with a single species, and how it fashioned the way he has lived, worked and played, might.

The years of research brought him into touch with woodmen, foresters, artisans, friends, craftsmen and makers, including Co Waterford hurley maker Frank Murphy, during a walk through woodland on the Curraghmore Estate in Portlaw.

“We walked slowly, pausing in the glades where the sun fell in heated hoops. I felt the sense of antiquity that is common enough in woodlands. The ash trees – tall, slender and smooth-barked – grew randomly between eminent oaks, the odd birch and hazel stools cloaked in ivy,” he writes.

His journey begins with a single ash from Callow Hill in the Black Mountains on the Welsh border, which, once felled, was used to make a desk and several types of table and worktops.

The list does not end there: shelving and panelling came from it, too, along with cricket stumps and tent pegs, spoons, spatulas and chopping boards, felloes for cart wheels, a canoe paddle, toboggan and arrows.

Even then, it had more to give, including parts of the roof of a 16-foot yurt, a portable, round tent, porridge spoons and bowls, coat hooks, animal bedding and kindling.

Part of the attraction of ash, said Penn, was that it was always workman’s timber, in contrast to the oak beloved of the aristocracy.

Stepping into Wood’s Derbyshire workshop was like stepping back into the Middle Ages, writes Penn, noting the wood lathes have been around for three millennia.

Penn describes the lathe, evoking a Gandhi-esque image of frugality and craftsmanship in harmony.

“It took a second to depress and release the treadle. The bowl blank was in almost perpetual motion, pausing momentarily at either end of its rotation as the rowan pole readied itself to straighten and bend again.

“Robin only drove the tool against the wood as he pressed on the treadle, but the noise of the iron cutting the wood hadn’t faded away before it began again. The sound was constant and circular, rising and falling in intensity with the direction the ash blank span.”

Today, almost all modern sports equipment is fashioned from contemporary substances such as plastic or titanium: “I couldn’t believe that in Ireland, the game of hurley was still being played with an ash stick,” said Penn. “It may be the oldest extant field game known to man still played. That’s extraordinary! I love that intimacy and continuity.”

But all is not well with the ash. As Penn began his odyssey around the tree, dieback, the tree’s fungal killer, began to sweep through England and Wales . . . and has reached Ireland.

The first wheels, invented some 5,500 years ago in one of mankind’s early great technological leaps forward, were probably made of ash – the tree used to fashion London’s Routemaster buses up until the 1960s.

“We need to up our game in plant pathology. We were very good at it in Britain and Ireland 100, 150 years ago,” he said, suggesting a ban on imports of plants in soil and stronger border policing of imports.

Dieback is here and cannot be expunged.

“It will silently and stealthily move across the country in the next 50 years,” said Penn. “It will change the way the landscape looks. It will change it dramatically.”

The Man Who Made Things Out of Trees is published by Particular Books, price £16.99