Remembrance day for victims: 130 people killed on the State’s roads so far this year 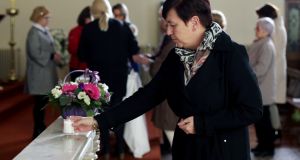 Sharon Keegan, from Ballyfermot, Dublin, places a candle on the altar in memory of her son, James who died at the age of 21 in October 2010 at a special mass to mark World Day of Remembrance for Road Traffic Victims at St Michan’s Church in Dublin. Photograph: Laura Hutton/Collins Photo Agency

The head of the Road Safety Authority (RSA) has called for the Garda to be equipped with mobile devices to detect illegal drivers “in real time” at the roadside.

RSA chief executive Moya Murdock said disqualified and unqualified motorists were continuing to drive undetected. “People who engage in that type of behaviour are generally non-compliant in all other areas of road safety,” she said.

Gardaí needed to be provided with a mechanism where they could check at the road side whether a motorist held a valid licence, instead of waiting until they returned to the station or instead of asking someone to bring their to the station. “That’s not an effective or an intelligent way to police the roads,” she said.

Such mobile devices were available, but she said it was “a challenge to get the commitment and the resourcing of that – to roll out handheld devices to the full traffic core and gardaí in general. All of them need that to be effective.”

Ms Murdock was speaking on RTÉ radio on Sunday on World Day of Remembrance for Road Traffic Victims.

More than 24,000 people have died on the State’s roads since records began – about 5,000 more than the population of Sligo.

According to the RSA some 24,255 people have died since the recording of fatalities began in 1959.

According to provisional Garda figures covering January 1st this year up until Saturday night, 130 people were killed on the State’s roads. The figure is about two less than were killed in the similar period last year.

However the RSA has consistently said all road deaths are avoidable.

That view was reiterated by Minister for Transport Shane Ross who, addressing Remembrance Day, said too many people were left asking, “what if?”

“If only the driver of the other car had not had that second pint. What if the other car had kept to the speed limit. If only she had worn her hi-vis jacket. What if he had put his seat belt on?” were just some of the recriminations in which people engaged, said Mr Ross.

“Far too many people are asking these questions, not just today, but every day as they struggle to cope with the tragedy that took their loved one from them” he said.

The Department of Transport is working on graduated penalties for speeding which the minister has previously said he hopes to bring in to reflect the Government’s determination to reduce the numbers killed on the roads.

Mr Ross is also concerned that some 50,000 drivers were caught using their mobile phones while driving. “How many think they have gotten away with it, until they cause a collision?” he asked.

Mr Ross said “unbelievably” there were “people still out there – and in our parliament – who think it’s worth taking a risk and driving while over the [drink-driving] limit.

“Whatever about risking their own lives – and surely they have families and friends who would mourn them deeply – they are also risking the lives of others.

“That is, quite frankly, unforgiveable,” he said.

“Today, please spare a moment to think of them and the loved ones they have lost. And then remember that it didn’t have to be like this. Road fatalities are preventable. Totally preventable. Which makes them all the more tragic,” he said.

Dublin south west election contest a ‘challenge’, says Zappone 19:20
Cervical campaigner Stephen Teap wins Cork Person of the Year Award 19:16
Driver may have travelled 22km with explosive device attached to car 19:08
Destitute in Dublin: ‘You are vulnerable in a tent. Nowhere is safe’ 18:43
Dublin homes within walking distance of park are worth more, conference told 18:08