Varadkar pledges to increase threshold for top tax rate to €50,000

November 18th, 2018: Speaking at the weekend's Fine Gael Árd Fheis, Taoiseach Leo Varadkar says he will cut taxes over the next five years if the party stays in power. Video: Fine Gael 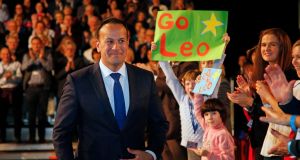 The level at which people hit the higher rate of income tax will rise to €50,000 over the next five years if Fine Gael is in power, Taoiseach Leo Varadkar has pledged.

In a speech given to the Fine Gael Ardfheis, Mr Varadkar said the party must go further than recent moves to raise the threshold at which people begin to pay the 40 per cent rate.

As a result of changes announced in the budget last month, the rate will be levied on income above €35,300 from next year on.

However, the Taoiseach’s keynote speech to his party’s Ardfheis contains a promise to significantly accelerate the pace of tax cuts in the coming years. The policy announcement will be seen as a significant move by Fine Gael, given recent budgets have been heavily tilted towards increases in public spending.

It is claimed that projections produced on budget day allow for tax packages of that size every year for the next five years while “still allowing for significant surpluses”.

In his speech, circulated to media outlets ahead of delivery on Saturday, he characterised the current income tax regime as one several “unfair” legacies of the “reckless economic mismanagement of the past”.

“We have managed to reverse much of that unfairness, but some elements persist. For example, people on average incomes in Ireland pay the highest rate of tax. The average full-time income is almost €46,000 but in Ireland we pay the top rate of tax on just over €35,000.

“It discourages parents from returning to the workforce, discourages people who emigrated from coming home, and makes it harder to attract good jobs and talent to Ireland. It is holding our country back.

“Fine Gael will end that unfairness. But we won’t do it in one big dramatic move – we have learned from the mistakes of Fianna Fáil. We’ll do it in a way that’s sustainable and affordable.

The current point at which a dual income couple enters the 40 per cent rate is around €70,000.

On the issue of the talks with Fianna Fáil to review and possibly extend the confidence and supply deal, Mr Varadkar said he is “confident we can secure a deal to provide political stability”.

“We will need it as we lead our country through Brexit in the year ahead,” he told delegates at the City West conference centre in Dublin.

On the issue of Brexit, he said the Government has no “hidden agenda”.

“Our only red line is protecting the Good Friday Agreement: peace in Britain and Ireland; powersharing in Northern Ireland; ever closer co-operation North and South and no hard border.

“No matter what happens across the water, Ireland will continue to be at the heart of the common European home we helped to build. We will do all that we can to build a new relationship with our nearest neighbour.”

In his speech, the Taoiseach also emphasised Fine Gael proposals to assist the self-employed. “I’ll never be found wanting when it comes to standing up for the self-employed – our shopkeepers, our solicitors, our auctioneers, our plumbers, and our farmers,” he said.

He added that he wants to ensure “full equality for the self-employed when it comes to income tax”.

“There’s no reason why someone who’s self-employed should pay more income tax than those of us who are PAYE. And a safety net for a self-employed person who loses their job or business through no fault of their own.”

“Some people see a tax cut as the State giving you money. We see it as the State allowing you to keep more of your money, the money you earn.”

He also said Fine Gael is building a State that “cares and, in particular, one that cares for families”. He referenced previous announcements to increase public sector pay, reduce tax, and increase childcare subsidies, among other policies.

Mr Varadkar defended his Government’s performance on the controversial issues of health and housing. He said the “housing crisis was many years and perhaps decades in the making”.

“We know what we inherited from Fianna Fáil – broke banks unable to lend, ghost estates, pyrite . . . Priory Hall, hundreds of thousands of people in negative equity, mortgage arrears, and hundreds of thousands of construction workers on the dole. It was never going to be easy to turn things around but bit by bit, just as we did when it came to unemployment and the economy, we will.”

On health, he said there is now a consensus on how the health service will be reformed via the Sláintecare plan and “a leader in Simon Harris to make it happen”.