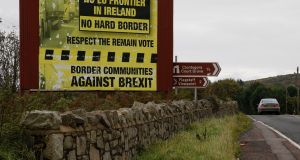 The Revenue has said that even in a ‘soft Border’ scenario, certain controls are unavoidable and a number of designated and resourced crossings will be required. Photograph: The Irish Times

Revenue has warned an open Border between the Republic and Northern Ireland is not possible and that eight customs checks and visible border controls may be required.

In a report published this week, Revenue advises of the economic consequences for Ireland arising from a British exit from the European Union.

The report concludes it is naive to believe a unique arrangement can be negotiated and applied to the Republic and the United Kingdom.

Three or four designated crossings may be applied to the Border between the North and the Republic, which is 500km in length.

However, it adds: “A final scenario of somewhere in the region of eight designated crossing points is not inconceivable.”

“The staffing and infrastructure costs associated with such an outcome, along with the physical infrastructure required to facilitate efficient processing at these sites, will make this a significant project.”

Revenue began this work before the result of the British referendum was known. It completed its work in September 2016.

The agency has stressed this was preliminary work and does not take account of key decisions that have been adopted since that juncture.

Contained in the report is a clear insistence that an open Border is almost impossible.

The choice, it says, is between a hard Border as applicable in some parts of the European Union or a soft Border, which applies between the EU and Norway or Switzerland. Both come consequences, Revenue warns.

It adds: “Even in the latter scenarios, certain controls are unavoidable and a number of designated and resourced crossings will be required to meet the needs of legitimate trade and to satisfy our EU obligations.”

The report says what is unique from an Irish perspective is the lack of actual physical border markings and signs to indicate that you are entering a different jurisdiction.

A possible option is an e-flow-style automatic number plate recognition (ANPR) system that would allow vehicles carrying goods to move from the Republic to the North and vice-versa without having to stop in cases where a pre-departure/arrival declaration has been lodged and green-routed, it suggests.

For such a system to work with it would require an interface between both countries’ electronic systems, the report adds.

Whether such a system can be commissioned and installed in time is not known but Revenue says an analysis must be conducted to establish the cost and the practicalities of such before proceeding.

It also says clarification would be required from the European Commission as to what extent a camera-based system could be considered to meet this requirement.

It adds: “In any event, a physical customs presence would still be required to engage with legitimate traders and to meet a range of EU obligations.

“Regardless of any efficiency arising from an ANPR system, the inevitability of certain consignments being routed other than green and goods or documents having to be examined would still require investment in suitable facilities at all designated crossing points.”

A particular issue in this regard may be the logistical challenge of placing permanent controls on the M1 route from Dublin to Belfast.

The report examines the effect Brexit will have on the exchange of goods and services between the State and the United Kingdom.

In relation to customs, the agency said significant further research was required to establish the effect on transactions.

In any event, it says a significant increase in human resources and a major investment in physical infrastructure will be unavoidable at existing ports and airports and at the new land frontier.

The effect on business will be influenced by the extent to which the existence of customs formalities becomes a deterrent to Irish UK trade and “sees a degree of substitution of EU goods for items previously sourced within these islands”.

It adds: “Although the significant level of human resources required to support customs control programmes cannot be discounted, the primary interface between trade and customs will be our electronic systems and it is on these that the main burden of increased activity will fall.”

The report also advises An Post would have to double its customs staff to carry out controls at the three postal depots.

There are about 20 customs staff based at mail centres at present whose functions include assessing all non-EU mail for duties together with carrying out prohibition and restriction controls.

1 Sand-hued cyclepaths changing the face of south Dublin coast
2 Midlands lockdown: ‘Why shut down Offaly and leave Dublin open?’
3 Meat plant clusters may be down to softly-softly approach
4 Midlands lockdown: Movement restrictions in place for residents of Kildare, Laois and Offaly
5 Midlands lockdown could extend to other areas, warns Covid-19 team
Real news has value SUBSCRIBE