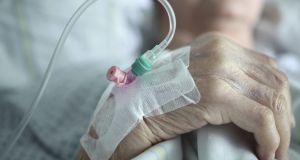 The report argues that the widespread use of agency nurses in inpatient hospital units – who are often unfamiliar with patient issues and hospital processes – should be phased out. Photograph: Joerg Reimann/Getty Images

Deficiencies remain in aspects of cancer care in Ireland despite major progress in recent years, an international evaluation commissioned by the Government has found.

It states that nursing shortages in chemotherapy delivery units are “a major concern regarding patient safety”. The report describes the lack of advance nurse practitioners in this area as “startling” compared with other countries.

On cancer surgery it says “there seem to be considerable delays in diagnosis and treatment due to lack of beds due to admissions from emergency departments”.

“We were informed that cancellation of planned cancer surgery occurs on a regular basis and this should not be allowed to continue.”

The evaluation of the national cancer strategy drawn up in 2006 was presented to the Department of Health last December. It is expected to be published later this week.

It says there has been significant progress in early diagnosis, with the development of rapid access clinics in breast, lung and prostate and the implementation of three national screening programmes.

The report forecasts that the incidence of cancer will rise by 27 per cent between 2015 and 2025. It recommends that the National Cancer Control Programme (NCCP) continue overseeing the Irish cancer system.

However it says key areas require attention and that a model of round-the-clock care should be developed.

The report says there are 34 oncologists in Ireland; international standards suggest a minimum of 60 as appropriate.

It also maintains that there is “ a considerable regional variation in access to prostate rapid access clinics due to a shortage of urologists”.

The report argues that the widespread use of agency nurses in inpatient hospital units – who are often unfamiliar with patient issues and hospital processes – should be phased out.

It says there is a severe shortage in allied health professionals including pharmacists and describes rehabilitation services as “poor”.

It urges the creation of “comprehensive multidisciplinary oncology teams” and the continued consolidation of cancer surgery services.

It also recommends that the mandate of the health safety watchdog Hiqa be extended to cover the private sector.

An NCCP spokeswoman said cancer services were unrecognisable compared to 10 years ago. “Significant progress has been made in developing, centralising and improving services that will ultimately deliver better care and improved survival outcomes for patients,” she said.

Government sources said concerns raised in the report would be looked at as part of the develoment of a new cancer strategy.