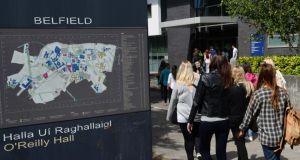 Students at UCD in Belfield: South Co Dublin is the most expensive area in the country, with the average rent now €1,573, up 6.1% on a year ago. Photograph: Cyril Byrne/The Irish Times

Young people celebrating their CAO offers face an uphill struggle to secure accommodation, with the number of properties to rent across Ireland remaining extraordinarily tight, according to a new study.

The latest rental report by property website Daft shows that while the cost of renting in Ireland fell slightly during the second quarter, it is still up 8.6 per cent compared with the same three-month period a year ago.

The slowdown in rental cost inflation was attributed to declining costs in Dublin, where rents have eased from 15 per cent to 8.5 per cent over the last 12 months. This has largely been offset, however, with an 8.7 per cent rise in rental costs outside the capital.

At the end of the second quarter, average rents in Dublin were up 8.5 per cent to €1,368, according to the latest figures.

According to the Daft report, the number of properties available to rent remains extraordinarily tight, with just 4,600 units available on August 1st, as against 6,800 on the same day a year earlier. By comparison, on August 1st, 2009, there were an estimated 23,000 properties to rent nationwide.

Supply in the Dublin market remains particularly tight, with fewer than 2,000 properties on the market on average since late 2012.

Overall, it is estimated that there are 700,000 people living in leased houses and apartments in Ireland, with almost 10,000 tenants joining the rental sector each month.

“As students prepare for entering higher education or returning from their summer break, they will find conditions every bit as tight as a year ago in Dublin – and in some places in the country even tighter,” said report author Ronan Lyons.

“This reflects a continuing lack of construction at a time when the population is growing.

“In addition to addressing high construction costs, which are impeding all forms of supply, policymakers also need to examine whether accommodation specifically designed for students suffers from additional barriers to supply.”

South county Dublin remains the most expensive area in the country to rent, with the average rent now €1,573, up 6.1 per cent compared with the same quarter a year ago.

UCD Students’ Union president Marcus O’Halloran said the situation was so bad some students might have to considering deferring for the year.

He urged homeowners to help alleviate the pressure on students by considering renting out empty rooms.

“Young people in third-level education across the country are being hurt by an overcrowded rental market in our urban centres. It’s not just a question of them being outpriced; even it rent is tied to inflation or capped by Government, the underlying housing shortage means inevitably high demand for housing will crowd out students anyway,” said Mr O’Halloran.

Niamh Randall, National Spokesperson for the Simon Communities said that details of the report are extremely disturbing.

“This is an emergency. Today’s figures support what we have been saying for some time now - this crisis is nationwide with a growing impact on all parts of the country. We see the devastating impact of rising rents and reduced supply everyday - people on low incomes and those in receipt of rent supplement can no longer afford rental payments.

“The Simon Communities are working with over 6,000 people annually and it’s inevitable that we will see even more people turning to us for help unless the housing crisis is urgently addressed. As rents continue to rise, the numbers of properties available have reduced significantly and are now at the lowest levels of availability nationwide in a decade.”