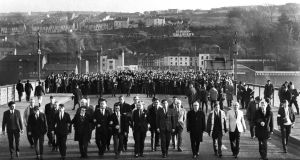 On a bright, cold Sunday morning, six men line up in the middle of Derry’s Craigavon Bridge.

It is 50 years since they stood on that same bridge, arms linked, walking towards a police cordon; behind them were 20,000 civil rights marchers. (View an interactive comparison of the images here)

The moment – captured by Derry Journal photographer Larry Doherty – would become one of the iconic images of the civil rights era.

Like many of those in the photograph, Michael Canavan keeps a framed copy hanging at home. Today, he has brought it with him, and as he and the other former marchers prepare to re-enact the famous picture for The Irish Times they crowd around it, recalling memories of the day and pointing out absent friends.

“When I look at that photo, I’m remembering the people who aren’t here,” says Dermie McClenaghan.

Chief among them is John Hume, who is too unwell to participate; in total, 10 remain; of those, eight are still resident in Derry, and only six – McClenaghan and Canavan, as well as Ivan Cooper, Fionnbarra Ó Dochartaigh, Terry Doherty and Aidan McKinney – are in sufficient health to return.

Cooper, now in a wheelchair, was determined to attend. “I go to church on a Sunday morning,” he says, “but I couldn’t miss this.”

Held on November 16th, 1968, the march was the city’s response to a much smaller protest a month earlier. That previous demonstration, on October 5th, had made world headlines when the marchers were attacked by the RUC and drenched with water cannons on nearby Duke Street. Among those present was Ó Dochartaigh: “We knew deep down we wanted change, and we weren’t going to wait another generation.”

The Derry Citizens’ Action Committee (DCAC) was established; Cooper was chairman, Hume vice-chairman. Fifty years on, the sense of history – and of occasion – is palpable among its surviving members as they introduce friends and family to their former comrades.

McClenaghan has brought along his wife and Doherty his son and granddaughters, visiting from Italy; photographer Larry Doherty’s daughters Dara and Moira have come to watch their father’s photograph re-enacted.

It has been made possible by event controller Billy Scampton – well used to stewarding events for Derry City FC – and his police contacts at Strand Road in Derry, who have willingly agreed to halt the traffic at either end of the bridge while the picture is taken.

The irony is not lost on those present. McKinney shakes his head, a wry smile on his face. “I can’t get over the fact that it was the police who attacked us on October 5th, and 50 years on they’re closing the bridge for us.”

As the six make their way onto the middle of the bridge and take up their places, McKinney recalls the “enormous tension” before the march. “The expectation was that there would be a large number of people and that the police would stop it.”

“We were scared,” says Canavan. “I remember the fear.”

The leadership lined up at the front of the march, with substitutes ready and waiting behind them. “The idea was that everybody had a second and even a third,” explains Terry Doherty. “That’s why in the picture we’re lined up in rows behind them, so that if the front row got arrested the second row could just take their place.”

Doherty was to stand in for Paddy “Bogside” Doherty, who had taken charge of the marchers behind them.

“I was supposed to be going back and forth to tell Paddy Bogside what was happening,” says Doherty. “We had 20,000 people behind us all wanting to go somewhere, and he was standing on top of a car keeping everyone calm.”

As the head of the march crossed the bridge, the photograph was taken. Ahead of them – just out of shot – was the police barricade.

Canavan, McClenaghan and others “broke” the barricade. “I remember going over it and I actually fell over and I was picked up by a cop,” remembers McClenaghan.

The barricade was more symbolic than practical, says Ó Dochartaigh. In the event, the marchers were able to simply walk around it, a solution which McKinney believes suited the police. “The numbers defied them, and they had been told not to challenge the march. People were able to just walk the barrier.”

“I remember I found this staircase down from the bridge, and I told everyone to get to the Diamond by whatever route they could,” adds Canavan.

Situated inside the city walls, the Diamond was both the geographic centre of the city and, to unionists, its symbolic heart; its breaching, by the marchers, was equally significant. “We had 20,000 people in the Diamond, inside the walled city,” says Canavan.

“It was just a moment in time,” says McKinney. “The mass impetus of such a massive number of people, you knew things were never going to be the same again.”

He was right. Within a week, Northern Ireland’s prime minister Terence O’Neill would announce a programme of reforms which conceded a number of the demands of the civil rights movement, including the introduction of a points system for the allocation of housing, an end to discrimination in employment and a review of the voting system.

As Canavan would later write in his report on the DCAC’s activities: “October 5th is but six short weeks ago and on Saturday last those few in number had become thousands strong and the might that humbled them lay outmanoeuvred, defeated and disgraced before the world.”

The reforms were “a direct consequence of the march”, says McKinney. The key, in his view, is that those present came from all backgrounds and sections of the community. “20,000 peaceful people made a powerful statement.”

McClenaghan agrees. “The most significant thing was the numbers. I think it was the biggest march that had ever happened in Derry, and it showed the strength of the civil rights movement.

“The numbers gave it an authenticity, and I do think it empowered people. It influenced all sorts of movements – the women’s movement, the gay rights movement – because it gave people a sense of what they could do if they got together.”

Fifty years on, the former marchers are together again. As they stand on the bridge, they remember that day, and those that followed. Once again, a photograph is taken.

As the Sunday morning traffic resumes, they make their way back to the pavement and bid each other farewell.

Canavan shakes hands, his eyes sparkling. “That was such fun,” he says.