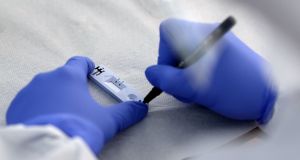 The use of so-called “rapid” Covid-19 tests is to be given the green light for use in monitoring outbreaks in schools and other areas of the community.

The recommendation, due in the first half of this month, is set to be made by a group led by Prof Mark Ferguson, the director general of Science Foundation Ireland, which has been tasked with looking at the use of antigen tests.

Their use has encountered resistance as they are less sensitive than the PCR tests, which are regarded as being of a higher standard.

The development comes as schools prepare for a staggered reopening, with tens of thousands of junior and senior infants, first and second class, and Leaving Certificate students due to return on Monday for the first time in months.

As the third Covid-19 wave recedes, there remains concern over the healthcare system. The Cabinet has been warned that the impact of the post-Christmas surge in confirmed cases is still being felt, particularly in intensive care units. The longer stays of Covid-19 patients in ICU are having a disproportionate impact on bed availability, turnover and resource allocation, Ministers have heard.

The Government was also warned that staffing pressures continue to be felt, with 3,350 healthcare workers absent, sick or off due to being close contacts of confirmed cases of the disease. The pressures of the vaccination programme, where some staff are set to be deployed, will also have an impact on elective and emergency care, Cabinet was told.

Prof Brian MacCraith, chair of the vaccine taskforce, said first doses for over-85s would be completed this week, and the vaccination of 80-84 year olds would commence.

First doses are to be completed in long-term care facilities this week and for healthcare workers during the second week of March. Meanwhile, those with specific medical conditions such as cancer and chronic kidney disease and the immunocompromised will begin to be vaccinated from next week (March 8th).

A protest over Covid-19 restrictions in Dublin city centre at the weekend turned violent, with 23 people arrested and charges brought against 13 people in court so far.

Gardaí believe they have identified a group who launched fireworks at officers on Grafton Street, and expect to make more arrests soon. Tánaiste Leo Varadkar is to write to major digital media companies to raise concern over their platforms being used to plan events that disobey public health laws.

National Public Health Emergency Team member Dr Philip Nolan on Sunday told Newstalk’s On the Record programme that he anticipated “some progressive easing of restrictions over time from April/May onwards” and that widespread vaccinations may permit “many of the restrictions [to] fall away quite quickly”.

Six deaths and 612 cases were confirmed on Sunday and, despite slow progress in driving down infection numbers, deputy chief medical officer Dr Ronan Glynn said there were “more concrete reasons for hope and optimism now than at any time over the last 12 months”.

It is understood that current projections are for between 150 and 350 cases per day by April 5th, the date when the Government has suggested there could be some easing of curbs.

Sources close to the planning process said if current trends continued, the 5km travel limit and construction restrictions could be relaxed in April, and non-essential retail and outdoor activities could be permitted in May. Some strictly limited mixing of households could be permitted at that time.

The Cabinet’s economic subcommittee will meet on Monday to discuss the cost of Covid-19 measures, EU pandemic grants, the National Development Plan and the post-Covid recovery plan.